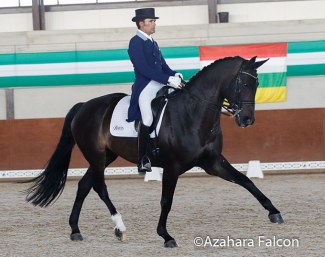 Frimousse was a 2009 born Oldenburg mare by Fidertanz out of elite mare Goldika (by French Kiss x Argentinus x Sandro).

She was bred by Alfons Anneken and was owned by Spanish based Swiss Anton Walliser.

"Shocked, sad, and soul shattered, I had to say goodbye to our champion Frimousse," Mena wrote. "Yesterday afternoon, an acute colic snatched her from us without giving us any option."

Frimousse was trained to small tour level by the 75-year old Swiss owner who is based in Spain at equestrian centre Dos Lunas. Frimousse had her international show debut under the owner in 2017 at the CDI Medina Sidonia, achieving modest scores.

In 2020 Walliser handed the ride on Frimousse to Garcia Mena. They made his international show debut at the CDI Segovia in August 2020 and won the Prix St Georges with 71.647% and the Inter I with 71.882%.  In the autumn the pair was the undisputed winner of the 2020 Spanish Dressage Championships at small tour level.

"She was the ballerina of maestro Anton Walliser who trained her with so much care," Mena explained. "Through her I was able to feel all that sensitivity that Anton possesses and which he translates to his horses. Unfortunately she did not give me the time to show the Grand Prix potential she had in her."