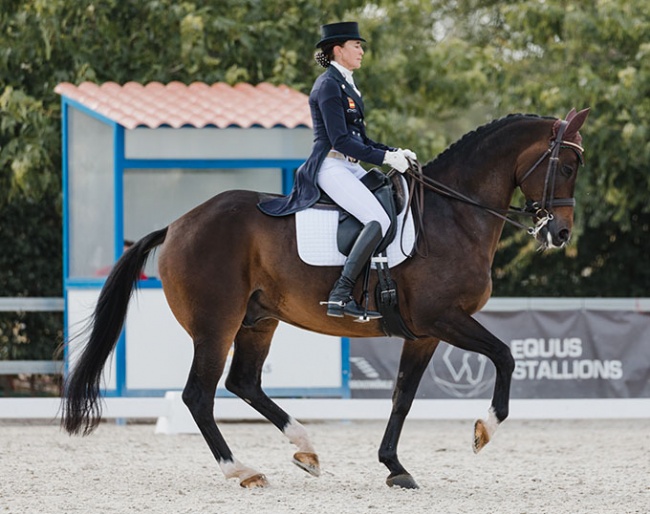 Talented combinations delivered quality performances, but it was serial winner Beatriz Ferrer-Salat that captured the limelight, claiming her eighth Grand Prix title in her career.

Twenty-three riders completed the starting list for the Grand Prix, and eight riders made it to the finals, the freestyle.

For her fifth time in a row and eighth time in her career, Beatriz Ferrer Salat claimed the national title.

After an impressive recovery from her accident  on 24 January 2020 - Beatriz fractured her pubic and tail bone after falling off a horse during a hack - Ferrer-Salat and her 2021 Tokyo Olympic hopeful, the 11-year old Dutch bred Elegance (by Negro x Monaco) won the Grand Prix with 72,804% and the Grand Prix Special with 74,149%. They were second in the Kur to Music (76,47%) behind José Antonio García Mena, but with an overall total of 223,420 points, the title was theirs.

Beatriz Ferrer-Salat is the clear example that nothing is impossible. She has proven that with sacrifice and tenacity everything can be possible. Her recovery has been a hard fought process of incessant physiotherapy and rehabilitation, which, eight months later, put her back on the golden step of the podium.

With this eighth national triumph, the queen of Spanish dressage continue to reign. Her first medal was with Beauvalais in 2001 (Málaga), the next one was in 2010 riding Fabergé (in Toledo), the third on Beauvalais in 2003 (Jerez). Her fourth title was in Oliva Nova in 2016 on Delgado, and three more followed on that horse in 2017,  2018, and 2019. She has now has added the 2020 title to her collection, her eighth with her fourth horse.

"It was very exciting," Beatriz took to Instagram. "To pick up competition again after my injury and to feel the sensation of being back in the show ring."

The silver medal went to Jose Antonio García Mena aboard Mercedes Freixas Fuste's 14-year old Dutch warmblood bred Benzi Landro (by Olivi x Inspekteur). He totalled 218,916 points after placing fourth in the Grand Prix (72,761%), climbing to third in the Special (72,043%), and then dominating the freestyle with 76,525%.

Mena also brought along his second Grand Prix ride, Madeleine Winter-Schulze's 13-year old Westfalian gelding Sorento (by Sandro Bedo x Florestan). With the chestnut he placed second in the GP and Special but he was only eligible to rode one horse in the freestyle and opted for the more experienced Benzi Landro.

A brand new face climbed its way to the bronze step of the podium amongst the established dressage elite of Spain: Carlos Bayo Calvo.

José Antonio García Mena and Anton Walliser's 11-year old Oldenburg mare Frimousse (by Fidertanz x French Kiss) were a league of their own finishing at the top of the leader board far ahead of all competitors. The Andalusian rider achieved a golden hat-trick with very solid scores. The pair posted 71,823% (PSG),  74,736% (Intermediaire I),  and an impressive 78,675% (Inter I kur). For the former Spanish team rider the weekend was a great success as he returned home with two medals and one national title.

Throughout these years, José Antonio García Mena has shown that his training system does not fail. His stable presents a wide range of horses, breeds and ages, that shine on a national level. Mena is now seeking to reconnect with international top sport after the retirement of his team ride, Norte Lovera.

On the second step of the podium was a new star on the block,  young rider Júlia Alvarez Abad. Alvarez and the 16-year old Hanoverian gelding Du Pre (by Don Frederico x Weltmeyer) fought until the end in order to stay in the top 3 of the 2020 Spanish Small Tour Championships. Placing second in the first and second round, Alvarez was fourth in the Kur with 73.280%. Her overall total of 215.69 points sufficed for silver.

2020 has been an impressive season for Beatriz’s Ferrer Salat student. After placing in the Kur Finals at the 2020 European Young Riders Championships, which was her main goal, she went full steam ahead and also claimed the national Spanish Young Rider Champion's title. What she thought was the icing of the cake, was not the end of her string of success, as the took the 16-year old also to the Small Tour Championship to win the silver medal, a milestone in Júlia Álvarez's professional career.

Beatriz Ferrer Salat and the 10-year old Dutch warmblood mare First Lady (by San Remo x Tolando) ended up with the bronze. They placed eighth  in the first round with 68,441%, but climbed  to the third spot in the Intermediaire I (68,333%). In the finals they stayed on the bronze spot with a third place in the Kur on 74,305%.  Their overall total put them third. Trainer and student were on the podium, a big personal achievement for both.

The 2020 championships will be a championship worth remembering. Not only because of the corona pandemic, which has altered daily life and competition sport, but for some great moments in Spanish dressage sport.

One of them has been the great come back of Juan Matute Guimón to the competition arena. After a massive brain bleed in the beginning of May, the 2018 Spanish WEG team rider was in a coma for a month, but miraculously recovered. His courage and above all endless desire to continue against all odds made him push for a quick return to the saddle. Although dealing with severe muscle loss from the the com and long hospitalization, Matute's speech and motor skills were swiftly back to normal.

Another special moment worth mentioning was the minute of silence held by the Organizing Committee in honour of the recently deceased Rubén Arrabe.