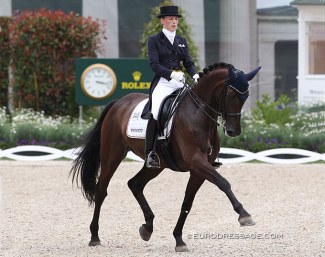 Fifth Avenue was a 1998 born Westfalian mare by Florestan out of Rubinca (by Rubinstein x Carprilli x Graziano). She was bred by Hedda's father Walter Droege.

The mare made her national show debut in Germany in 2003 as a 5-year old under Kathrin Schneider.

She was competed in the A-level dressage horse tests at a few shows before Hedda took over in the autumn to ride her in a few L-level classes.

In 2004 Karla Spiritus began developing the mare and competed her hrough Prix St Georges level until 2006.

As of 2007 Hedda and Fifth Avenue made a solid partnership at Grand Prix level.

That year they competed in the Piaff Forderpreis qualifiers in Hagen and Verden, for instance, and made their CDI debut in Bremen in October 2007.

The pair campaigned at international Grand Prix level in 2009 and 2009, skipped a year in 2010 and did two more CDI's in 2011. They only competed in Germany (Aachen, Oldenburg, Braunschweig, Dortmund, Lingen and Oldenburg). They were most active at national level on the Piaff Forderpreis circuit from 2007 through 2011.

At the CDI Oldenburg in November 2011 they rode their last international competition, finishing fifth in the Grand Prix (71.277%) and 10th in the Special (66.289%). Their last national show was the CDN Braunschweig in March 2012 where they won the Grand Prix and were third in the Kur.

Fifth Avenue was retired from sport in 2012 at age 14 and joined the Droege breeding programme at Gut Dalmer.

Unfortunately she produced only one foal, a colt named Sixth Avenue (by Sezuan), who was born in 2015

Last week she was euthanized. "She was sick and now it was time to let her go," Hedda told Eurodressage.

"I am thankful for the time I had with her," Hedda added. "Thankful for the great successes in the sport but also for her efforts as a breeding mare and pensioner! She was special in every part of her life, always her own character with a special charisma. And she preserved that till the end! What stays are wonderful memories of a unique character horse. And on top she gave me the best present you could wish for: Her son “Sixth Avenue”. So in a way she is still here!"