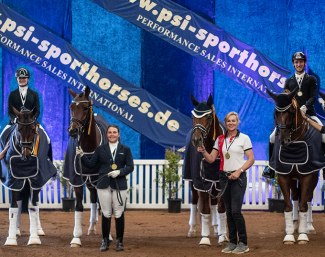 After skipping a year to due to COVID-19, the annual multidisciplinary event that is the "Performance Sales International Dressage and Jumping with the Stars" event returned to Werribee Park for 2021. PSI has been the year-long sponsor of this event, which annually hosts the Australian Young Horse Championships. Even through these turbulent corona times PSI continued its commitment to sponsor this show.

Bred by Johannes Westendarp in Germany and owned by Susan Gorst, Imagine dominated the category, winning the warm up round with 87.00 points and then claiming the title in the Finals on 89.80 points. The horse scored 8 for walk, 8 for trot, 10 for canter, 8.5 for submission and 9.5 for perspective.

The runner-up was Tyler Bain on the Australian warmblood bred Quizzical R (by Questing R x Jive Magic). Bred by Grand Prix rider Heath Ryan and owned by Bain, Quizzical moved from a sixth place in the warm up (74.80 pts) to a silver medal in the finals with 80.40 points. He earned 7.5 for walk, 8.7 for trot, 8 for canter, 7.5 for submission and 8.5 for perspective.

Lizzie Wilson-Fellows and the Australian bred HB Furst Choice (by Furst William x Chequille Z) scored the bronze with 79.60 points, after earning 7.5 for walk, 8.2 for trot, 7.9 for canter, 8 for submission and 8.2 for perspective. HB Furst Choice is bred by Jane and Peter Bartram and owned by the rider. The pair started off with 78.20 points in the warm up round, which also placed them third.

The 5-year old finals were judged by Jane Ventura, Susan Hoevenaars and Maria Schwennesen and they favoured Jayden Brown on Willingapark Tito, a Hanoverian by Top Gear x Florencio, bred in Germany and owned by Terry Snow. The 32-year old Brown won the warm-up with 87.40 points and claimed the title in the finals on 84.40 points. The horse earned 8 for walk, 8.9 for trot, 8.4 for canter, 7.9 for submission and 9 for perspective.

The silver medal went to Maree Tomkinson aboard Friday IV, an Australian home-bred Furstenball offspring out of Maree's career making dressage mare Diamantina IV (by Diamond Hit). They were fourth in the warm-up round with 83.80 points and moved to a second place in the finals with 83.40 points. Friday received 8 for walk, 8.5 for trot, 8 for canter, 8.5 for submission and 8.7 for perspective.

The bronze was for Victoria Weird who made a climb from seventh place in the warm up with 76.40 points to a third place in the finals with 79.40 points. Aboard the KWPN bred Luckybird (by Everdale x Metall), who is bred in Holland and purchased by Australian Olympian Mary Hanna for 67,500 euro as the price highlight of the 2020 Van Olst Online Auction, Weir scored 7 for walk, 8.8 for trot, 8.5 for canter, 6.9 for submission and 8.5 for perspective.

Judges Ventura, Hoevenaars and Schwennesen officiated in the 6-year old Finals and Jayden Brown claimed his second title of the show aboard Willingapark Fangio, a Hanoverian by Flannell x Laurentio, bred in Germany and imported by Terry Snow. The pair won the warm-up with 86.60 points and earned gold in the finals with 81.00 points. Fangio received 7.8 for walk, 8.8 for trot, 8 for canter, 7.7 for submission and 8.2 for perspective.

Jason James and Total Zensation became the silver medallists on 79.20 points. In the warm-up the pair was fourth with 78.60 points, but they improved in the finals, receiving 7.5 for walk, 8.5 for trot, 7.8 for canter and submission and 8 for perspective. Total Zensation is an Australian warmblood by Zonik out of Bloomfield Floriana (by Fiderstern). The horse is bred and owned by Michelle and Steve Williams.

Elliot Patterson and Emma Weel's Oldenburg registered Riveroak Vogue (by Vivaldi x Sandro Hit) were consistent throughout the championship. The 29-year old Patterson finished third in the warm up with 80.80 and was third again in the finals for bronze with 79.00 points. Riveroak Vogue got 8.2 for walk, 7.9 for trot, 8 for canter, 7.4 for submission and 8 for perspective.

Only two horses participated in the 7-year old division after Alexis Hellyer withdrew her entry on Valhalla. Tthe finals were judged by Schwennesen, Ventura and Virginia Creed and they put Jayden Brown on Willingapark Quincy B on top with 82.786%. The 7-year old Hanoverian gelding by Quaterback x Desperados) was imported from Germany by Lauren George and sold to Terry Snow. Brown and Quincy B won the first round with 80.793% and ruled the Finals with 82.786%. The liver chestnut got 8 for walk, 8.8 for trot, 9.2 for canter, 8.5 for submission and 9 for perspective.

The reserve champion is Justine Greer aboard the Dutch warmblood bred Yarramee Fonzi (by Firestone x Polansky), owned by Sharyn McCombe and imported from The Netherlands. The pair first earned 74.622% in the preliminary round and 74.243% in the Finals. Fonzi received 7.2 for walk, 7.8 for trot, 7.6 for canter, 7.4 for submission and 7.6 for perspective.

Champion of Champions: Willingapark Quincy B

To conclude the 2021 Dressage with the Stars Australian Young Horse Championship, a special "Champions of Champions" class is held in which the winners of the four divisions battle it out against each other.

According to age, the oldest and most developed dressage horse was named champion of chamions, Quincy B, followed by Fangio, Tito and Imagine IV.