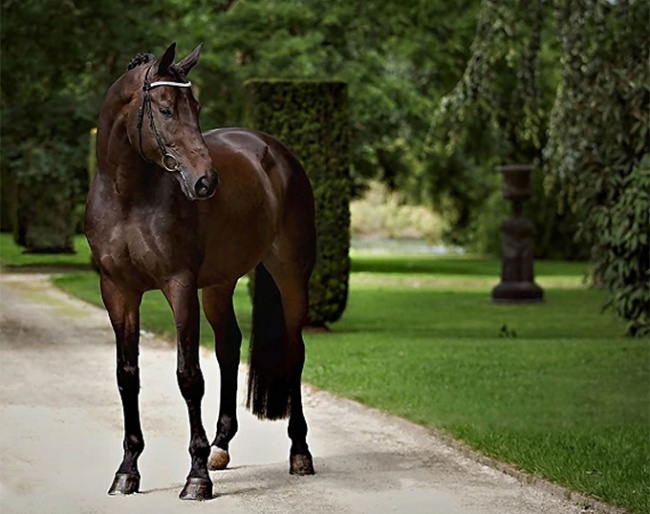 The Dutch based Elite Trakehner stallion Easy Game has received approval for KWPN breeding at age 18!

Easy Game is by Gribaldi out of ster preferent prestation mare Evita XII (by Schwadroneur x Cannon Row xx). He is bred by Filip Willemsen from Bergharen, The Netherlands

The bay stallion has been consistently owned by Joop van Uytert although in the past decade German Petra Wilm held a share, as well as the Belgian Veronique Swagemakers. He is co-owned by Van Uytert and Swagemakers.

The bay stallion was first trained by Jan Lens and then by Theo Hanzon and John Tyssen. He competed up to small tour level and trained to Grand Prix level.

In 2014 a 50% ownership share sold to Belgian Veronique Swagemakers who acquired the horse as a schoolmaster and sport horse. Easy Game moved to Belgium, but returned to The Netherlands in 2017 and resumed breeding.

Already in 2014, Easy Game was proclaimed Elite Stallion by the German Trakehner society.

Although he was never highly used by breeders, he produced two licensed sons (Sir Easy and the highly popular Millennium) and state premium daughters, Maxima and Vienna.

Easy Game's quality as a breeding stallion has only become truly apparent in recent years with his offspring reaching Grand Prix level.

"For breeding, Easy Game is interesting for his ability to collect, his talent for piaffe and passage and he passes on size. In addition he has unique blood for the KWPN pool," said  "Easy Game has the PROK predicate so fulfils the KWPN X-ray requirements."