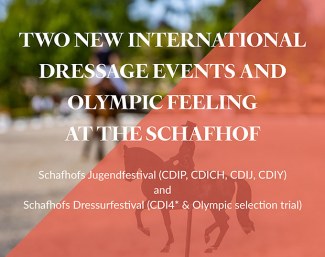 The summer of 2021 is looking great for Oceanside Events with two new international dressage events and Olympic feeling at Gestüt Schafhof in Kronberg, Germany.

So far it seems like that 2020 and 2021 have been an opportunity for Oceanside to take on some new challenges. They not only managed to expand their event schedule during corona-times but also made them to be of Olympic relevance.

While other main equestrian events are still cancelled or rescheduled, the team around Matthias Rath, CEO of Oceanside and Gestüt Schafhof, is launching not one, but two international dressage events this summer: Schafhof's Youth Festival and Schafhof'ss Dressage Festival.

The most talented riders of the world at the Schafhof

Schafhof's Youth Festival will be held from 17 - 20 June and will host prestigious international classes for CDIP, CDICH, CDIJ and CDIY.

An action-packed program for four days with the world’s best up-and-coming talents at arguably one of the most beautiful locations that the dressage sport has on offer.

The encouragement, to help young riders to reach the next level, has always been very important to the family Linsenhoff-Rath. It therefore comes with no surprise that they extend their event calendar with this new and very promising show for aspiring dressage athletes.

There will also be classes for regional riders, as they host the German PSJ-Cup, too.

Olympic feeling with the elite of the elite

But why only hosting one international show when you can have another one the week after?

After a very successful premiere of the Schafhof's Dressage Festival last year, the show will return at this year’s event schedule, stepping up to a CDI4* event from the 24 - 27 June 2021.

But not enough, the most exciting news are probably, that it has been selected to be one of the two mandatory selection trials for the German Olympic Dressage team. A starting list that could include names like Dorothee Schneider, Jessica von Bredow-Werndl and Isabell Werth will for sure make this event one of the year’s highlights for the international dressage sport.

The show schedule 2021 is topped off with qualifications for the NÜRNBERGER BURG-POKAL, Louisdor Preis and the Bundeschampionate as well as the Almased Dressage Amateurs and a hybrid foal auction in cooperation with the South-German-Studbook (DSP).

All of that shows exactly what the Schafhof stands for: Tradition and innovation.

There is no doubt, that this event location is one to watch in the future!

Further information around those two shows will be published soon. Keep an eye on the social media of Oceanside Events, where they will announce all news related to the shows.

Oceanside GmbH & Co. KG is the event-agency of the Linsenhoff-Rath family from Kronberg, Germany. The agency was created in order to professionally organize the Schafhof Festival’s back in 2003, which were held at the Schafhof. Over the years, not only the events, but also the content and expertise of Oceanside has developed.

In their projects, the team is characterized by versatility, professionalism, innovation awareness and ideas. Furthermore, experience and a unique mix of professional competence paired with a good feeling for business and people make this company unique. Next to the two international events “Schafhofs Jugendfestival” and “Schafhofs Dressurfestival”, the Oceanside team is also the organizer of the well-known and established CDI5* and CSI3* event in Frankfurt, which is held the last weekend before Christmas.

Schafhof summer is surely looking to be extraordinary.