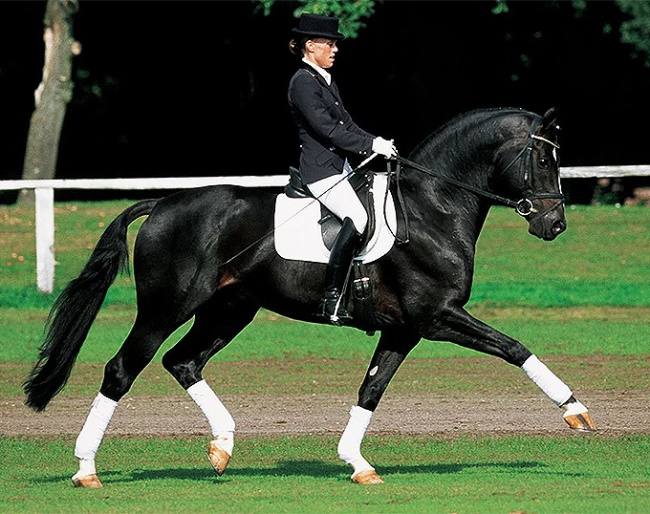 The Hanoverian breeding stallion Harvard passed away at age 25. He passed peacefully in his stall at Pangaea Farms in Marmora, ON Canada.

Harvard was a Hanoverian stallion by Hohenstein out of Carina (Cardinal xx x Ortelsburg). He is bred by Heinrich Lahmeyer.

Harvard was a premium stallion at  the 1998 Oldenburg Stallion Licensing and approved for Hanoverian breeding six months later in 1999. He finished second in the Oldenburg Main Premium Ring.

Stationed at Ludwig Kathmann's yard for breeding, Harvard did his 100-day stallion performance test in Neustadt/Dosse and scored 119,86 for dressage and 74.31 for show jumping, finishing on an index of 100,85 points which ranked him 28th out of 47 participating stallions.

According to the FN database, Harvard made on last return to a local show ring in 2003 in Weyhe-Lahausen at L-level under Simon Drop.

In North America, Harvard sired not only dressage offspring, but also successful hunter/jumper get.

As a breeding stallion, Harvard sired 3 licensed sons in Germany: Happy Diamond, Helly Hansen, and a nameless one who never did his performance test).  153 of his daughters are registered as broodmares with the German Equestrian Federation, 10 of them are state premium mares.

"At 25 years young, Harvard lived a good life and passed peacefully in his stall. Harvard will be sadly missed," Pangaea Farms posted.

David Burke told Eurodressage, "he was an amazing stallion with an incredible personality and temperament which he passed on to his offspring with his superb rideability and trainability and he was amateur friendly. He died as he lived with personality and class.  He passed away with his head on my lap."