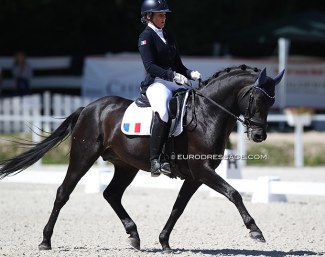 Under Cover Fast is a 13-year old Selle Français licensed pony stallion by the Trakehner stallion Latimer out of a Cansas dam.

He was the reserve champion of the French Pony Stallion Licensing.

Owned by Nolwenn Rouxel, the black stallion made his international show debut at FEI pony level with Charlotte Palas in 2016.

As of 2018 the owner's daughter, Cassandra Rouxel took over the ride and rode at the 2018 French Pony Championships, but were eliminated in the second round. They made her CDI debut in October 2018 in Le Mans with a nice 10th place in their first freestyle.  Rouxel and Under Cover Fast competed at just a few CDI's, one in 2019 (Nice), one in 2020 (Le Mans), but they made it to the 2020 European Pony Championships in Budapest, where they were 34th in the individual test.

For the 2021 season, French children team rider Stella Briand has taken over the stallion from Rouxel, who reached the age limit.

Dressprod announced that Briand plans to make her show debut on Under Cover Fast at the CDI Le Mans on 29 April - 2 May 2021.