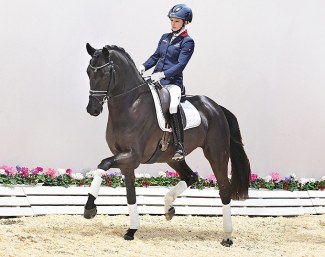 Exciting bidding duels until the last second - that was the 2021 Oldenburg Spring Elite Online Auction, which concluded on 10 April 2021. The 4-year old D'Amour became the best seller of the auction

D‘Amour (by D'Egalité - Ampère - De Niro) is bred by Klaus Kotschofsky and owned by Valerie von Hohenzollern-Brenske's Gut Feichten Sportpferde Management. The black mare sold 260,000 euro to a Hamburg dressage rider, who discovered the mare on a photo in an advertisement in the well-known magazine St. Georg.

The stallion Dovizioso (by Dancier - Sunny-Boy - Rubinstein I) bred by Thaden & Tienken, and owned by Gestüt Vorwerk, sold to a dressage stable in Belgium for 108,000 euro. Dovizioso's brother Dan Roy is successful at Prix St. Georges level with Heiner Schiergen.

The 4-year old Dresscode (by Danciano x Furstenball) sold for 72,000 euro. The same price was paid for the 5-year old Montblanc (by Morricone x Sandro Hit).

Half the Collection Moves Abroad

The best selling jumping mare was the 4-year-old OS Champion mare Only You (by Ogano - Balou du Rouet - Lord Liberty). She moved to a renowned jumping stable in Mexico for 88,000 euro.

On Sunday, April 11, the licensing candidates of the 10th Oldenburg Saddle Licensing that are up for sale will be published with photos, videos and a portrait in the auction section of the Oldenburg homepage www.oldenburger-pferde.com.

The saddle licensing will take place on Monday, April 19. The Online Auction starts on April 19 and ends on Wednesday, April 21.