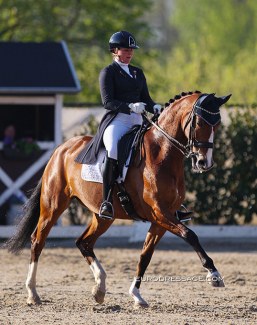 Djambalaya is a 13-year old elite KWPN bred mare by Santano out of Rosjade (by Democraat). She is bred by M.H. Barnhoorn and S. Huisman.

The bay mare sold as a foal at the 2008 Dutch Foal Auction Midden-Nederland. Jessica's father purchased Djambalaya at the 2013 Equine Elite auction as a youngster.

Leijser and Djambalaya made their international show debut in the 5-year old young horse classes at the 2013 CDI Vierzon, where they were third and fourth.

After a five year break from CDI's during which Jessica focused on national level sport, the pair returned to the international arena at small tour level in 2017, competing at the CDI's in Nieuw en St. Joosland, Munich and Hickstead.

In 2018 she competed at the CDI Lier, but Djambalaya's sport career was then interrupted due to a small operation to remove a fractured splint bone, which she probably sustained in the paddock or while rolling in her stall. By the autumn of 2018 they were back at full force at national level.

In 2019 the pair competed at the CDI Sint-Truiden, Deauville and Randbøl. Their most successful show was their last, the 2020 CDI Zakrzow in Poland in October 2020 where they finished second three times in the small tour classes.

In 2020 Jessica give birth to a daughter, Lauren, and competed Djambalaya once in an Intermediaire II.

Djambalaya was a sales project and has now found a new owner in Japan. Leijser will continue her career with the 6-year old Kashmir (by Glamourdale).