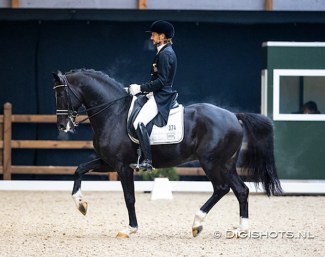 With a limited amount of CDI's surviving on the spring calendar in the lead-up to Tokyo team selection, the inaugural CDI Opglabbeek at Sentower Park on 21 - 25 April 2021 boasts a starters' list featuring the creme de la creme from Belgium, Britain and The Netherlands.

The Master lists for the CDI 3* and CDI 1* tour were released today and the field is packed with elite dressage stars.

The CDI Opglabbeek co-incides with the CDI Hagen and riders have to spread out to obtain a starting slot at either event. While Hagen will welcome the German, Danish, Russian, Swedish and Japanese Tokyo team potentials, Opglabbeek will be opening its doors to the Dutch elite, alongside three British team riders and Belgium's best.

With the exception of Emmelie Scholtens, who is riding Desperado in Hagen, the entire Dutch Olympic squad will be present in Opglabbeek.

Olympian Adelinde Cornelissen has cancelled her Hagen entry and opted to ride in Belgium. She is bringing Aqiedo and Governor for the Grand Prix and Henkie for the small tour.

An of course, Belgium will be present full force on home turf with no less than thirteen combinations participating in the big tour!

Belgian Tokyo Olympic qualification Laurence Roos will make her show come back after 8 months with top horse Fil Rouge (by Stedinger x Argentinus).  She will go head to head with Belgium's shooting star of the moment, Larissa Pauluis aboard Flambeau (by Ampere) and Valentin (by Vitalis).

The French based Laurence Vanommeslaghe will be presenting her two GP horses, Edison and Havalon, while Belgian Rio Olympian Jorinde Verwimp is riding Cape Town.

The show organizers are thrilled to welcome no less than 45 Grand Prix combinations to their event. The big tour is split into a Special and Kur tour.