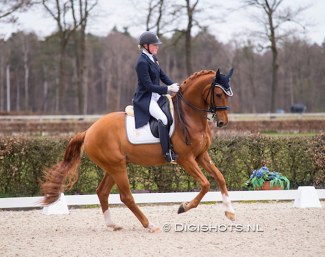 For 20-year old Dutch Zoe Kuintjes her last year at Young Riders' level has begun with a new job and two new horses to ride.

The young professional accepted a job at Annemarie and Kirsten Brouwers' sales and training stable and has been allocated two small tour horses for her to compete.

From Ponies to Young Riders

Kuintjes made her international show debut at the 2013 CDI Roosendaal aboard the Rhinelander pony Gaudy (by Golden Dancer). In 2014 she began competing Samantha van der Lof's Dutch team pony Elin's Noncisdador and represented The Netherlands at the 2015 and 2016 European Pony Championships and earned team bronze (2016) and finished 9th and 7th in the Kur Finals.

Kuintjes' last CDI start on Brittsion was in June 2019, after which she continued with Jonna Schelstraete's Cupido (by Tuschinski x Goodtimes) in 2020.

In pursuit of a professional career as a rider, Kuintjes left Schelstraete and accepted a job at Brouwer stable a month and a half ago.

"I ride now at Brouwers and alongside that I'm doing an online study in business entrepreneurship," Kuintjes told Eurodressage. "But for the rest I want to focus on riding and competing horses. I train with Annemarie (Brouwer) because I ride their horses. "

She has been given the ride on two horses to campaign at Young Riders level: the 8-year old French bred Hanoverian Don Clorentino des Paluds (by Juan de Hus x Florestan) and the more inexperienced 8-year old German bred Snowden RR (by Surprice x Hohenstein). At last weekend's Dutch youth training competition in Ermelo, Kuintjes made her show debut on both horses, achieving her best score of 68.18% on Don Clorentino.

When asked if she's pursuing a Dutch team spot for the upcoming European Championships, Zoe replied that "it would be nice to ride at the top again, but because of the few shows we have to gain some show experience again. Then we'll see here we are at."

Kuintjes will also make her come back on Desperado this weekend at the KNHS observation day. The mare Brittsion was retired from sport last autumn and has been put in foal to Glamourdale this spring.