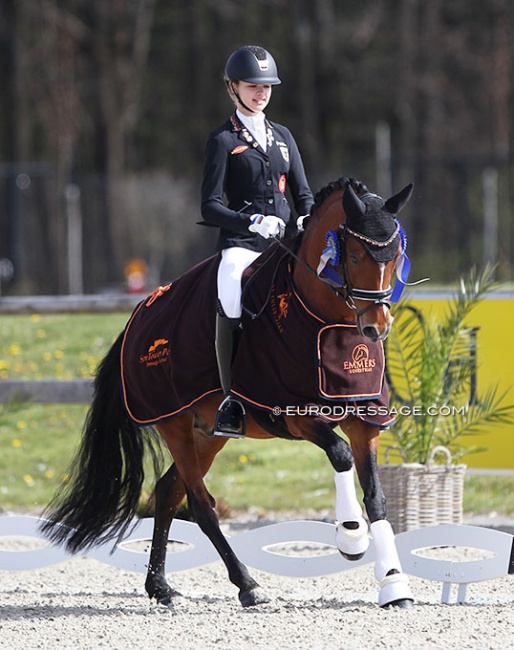 German team rider Antonia Roth must have surprised herself today, when she won the pony team championship, the opening class of the 2021 CDI Opglabbeek, not on her team gold medal winning top ride Daily Pleasure, but on her younger second ride, Dark Delight B.

The inaugural Sentower Dressage Festival kicked off on Thursday morning 22 April 2021, with wonderful, sunny weather, but an icy north wind blew a chill over the show grounds throughout the day. Sixteen pony riders were first to go in the main stadiumm. The pony team test was judged by Lars Andersson, Jacques van Daele and Eddy de Wolff van Westerrode.

Roth first rode her 2020 European Pony Champion team gold medal winning Daily Pleasure. The 10-year old stallion by HB Daylight x Dressman was obedient and on the aids and looked picture perfect in his attitude and willingness to do the job. However, he just did not look as fresh in his gaits as last summer. The trot lacked a bit of spring and lost rhythm in the extended trots, in the extended canter right the 3-beat rhythm got a bit lost and overall there could have been a bit more impulsion in the walk pirouettes and in one simple change. Neverthless, the seasoned pony did a beautiful job and the extended walk was one of the best of the day. They scored 73.333%.

At the end of the class, Roth saddled Dark Delight B (by Helios B x Golden Dancer) which showed a scopier trot than Daily Pleasure. While the walk pirouettes could have been a bit more engaged behind, the trot extensions were delightful. In the extended walk the overtrack can even be greater,  and also in the collected canter the pony needs to gain more balance and self carriage. However Roth made it all look very smooth and easy and that is probably what convinced two of the three judges. One judge had her at 69.714, including the issues at hand, the others raved and rewarded the test with 75.429% and 77.000%!! Roth and Dark Delight B won with 74.048%.

Maybe the most effortless ride of the day came from the second placed pair, German Maleen Kohnle on the 7-year old Westfalian mare Dabia Dior (by D-Day x Valido's Highlight). For Kohnle Opglabbeek is her international show debut and the 15-year old immediately posted a 74.000% score in her first international pony team test. Dabia Dior showcased two excellent halts, although the rein back was crooked. Despite a trembling lip, the mare was steady in the contact and the ride really stood out with its easy flow and regularity in the paces. Especially the canter work was well ridden.

Belgian Liezel Everars and the 10-year old Rhinelander gelding FS Capelli de Niro (by FS Champion de Luxe x FS Don't Worry) were on form for this home show. The combination rode a very meticulous, clean test in which the regularity in the gaits stood out. The walk was outstanding in rhythm and the canter work was very well produced with tidy simple changes. They scored 72.857% for fourth place.

German based Italian pony rider Virginia Spönle presented a brand new pony and what a show stopper it was. Coer Noble  (whose name has officially been misspelled while referring to the French word "coeur" for heart) is an 8-year old licensed stallion by Caramel WE x Noir de Luxe. This spunky, small buckskin had the biggest gaits of all ponies competing and totally rocked.

Trained by Jana Freund, Spönle and Coer Noble showed outstanding trot extensions and overall super nice and expressive gaits, but there is still much work to be done in the connection. The pony is not yet steady in the bridle, a bit fidgety in the mouth and often tilted his head.  Nonethless, they are a pair to watch for the future. They scored 69.286% for fifth place, with individual marks ranging from 65.857% to 72.571% !!

Eurodressage will be taking photos of all riders at the 2021 CDI Opglabbeek. If you are interested in photos for social media or prints, send us an email and we'll mail you the small versions of the photos to pick and choose from.