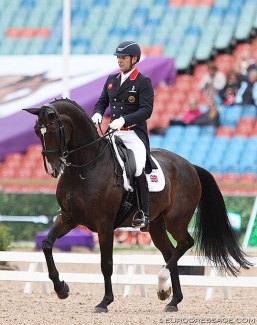 British elite Grand Prix riders are all gathering at the brand new CDI Wellington on 11 - 16 May 2021 as the show has been marked as a British team selection and observation trial for the Tokyo Olympic Games.

It will be the first ever international dressage competition at the Hampshire venue.

Big Tour, Battle of the Brits

With the Big Tour classes granted Olympic qualification status, the best of the British senior riders are all entered in their bid for a place on the Tokyo plane and a spot for September’s European Championships in Hagen.

Entries include, amongst others:

Come Back and Absentee

The biggest come back kid in Wellington will be Spencer Wilton on Super Nova. The pair represented the U.K. at the 2016 Rio Olympics, 2017 European Championships and 2018 World Equestrian Games. Their last CDI start dates back to the CDI Keysoe in March 2020.

Biggest absentee is Gareth Hughes' team ride Briolinca. The pair represented the U.K. at the 2019 European Championships in Rotterdam, where they became the highest scoring British pair in the Kur to Music finals. The mare last competed at the 2020 CDI Keysoe.

As well as the world class facilities which Wellington boasts, competitors will be under the eyes of some of the best judges currently officiating, with no less than seven FEI 5* judges on the panel of ten who will oversee the seven competitions.