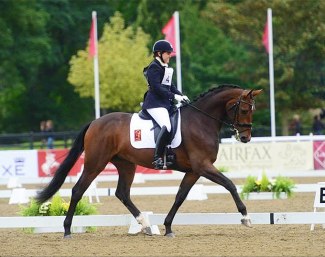 British Emma Jane Blundell is best known as the passionate horse breeder and business lady behind brood farm Mount St. John in Felixkirk, U.K. While she is best known for her breeding and one usually sees her on the sideline watching her horses compete all across the world (she owns Charlotte Dujardin's Mount St. John Freestyle), Emma also has ambitions in the saddle. In fact, her passion for riding got it all got started.

Here are her words on how Mount St. John came to be and how her own riding has recently reconquered a place in her heart:

From Showing to Dressage

14 years ago when I finished school and after a successful childhood in showing, I sold all my show horses to travel the world & work in Australia for a few months. On return I bought my first dressage schoolmistress called Fabiola. Together within 6 months I went from doing novice tests on my show horses to doing premiere league PSG’s at YR level with her, she was the ultimate schoolmistress & here started my love for mares!!

My first international call up for YR was Hickstead 2008 around 10 months into our new partnership. Unfortunately Fabiola went lame in training the week before the event...here starts the lesson of a career with horses where epic highs & lows need to be managed, but at the time I wasn’t prepared for the excitement followed imminently by shock & disappointment. I never got to compete her in an international show.

While studying at university but determined to continue on a competitive career path in dressage we bought an expensive horse with the aim for me to go onto U25 GP. I rode Deja’vu once a week at my trainers where she was stabled for 2 months before she too became lame, unknowingly never to return to any level of competitive dressage, despite 4 years trying to rehab her. I was devastated with 2 lame horses & couldn’t afford anything else so brought them both back home to recover & I focused on my studies & rode my Connemara pony.

After 4 years at uni I finished in Sept 2012 with a Business degree, first class Masters in Entrepreneurship & an exciting business plan about horses, which I started to put into place immediately to create Mount St John Equestrian. Nearly 9 years on I’m very proud of what the business has become & our results so far have surpassed all that I could have dreamed of for the early years of a new breeding program.

Deja’vu became the foundation of that breeding program and to date has produced us 12 offspring, 9 fillies & 3 colts the oldest of whom MSJ Benchmark (Bordeaux) is a licensed Oldenburg stallion. She also has 14 grand children from her daughters breeding & now 8 great grand children! She steered our love & success of the whole program.

Last year when I became so ill from the Corona virus for many months, which I am still not fully recovered from 14 months later, it made me reevaluate everything. The smallest tasks or irritants & any bad weather became overwhelmingly exhausting, but I also discovered some things (Like foals, my dogs, some particular horses, yoga, some flowers & sunshine) & some special people gave me energy back! In my exhaustion & foggy haze this was enlightening & hugely helped my recovery by focusing on much more positive than negative energy emitters.

VIP had returned to us for a break & some breeding at the time & then I had my first ride on her when Amy Woodhead insisted one day. Despite owning her from a foal (bought while I was studying for myself to ride when I finished). I had never ridden her until this point as she had been 4 years in training & unbeaten with the world's best Charlotte Dujardin!! I loved riding her immediately and got so much energy back!!

After a few careful sessions under Amy's guidance I took over the ride around September last year and have been getting to know her ever since. She’s an amazing, generous horse to ride and I pinch myself everyday to have a horse like her!! We’ve now done 3 shows together with scores up to a new PB of 75%! She’s motivated me to rekindle my love for competing and to fulfil some of my personal competitive goals again some 13 years after they were halted to focus on the other priorities.

While the business is still my main priority and my riding fits around that, after our recent post lockdown 3 results we’ve been invited to compete in our first CDI small tour together at Wellington next week! I will be so proud to ride with a GB flag on and I will be grinning like a Cheshire Cat, even with reality if we score 10% less than Charlotte would!! Endless thanks to Amy Woodhead for getting me on in the first place and all your support to get us this far already! Excited to see what the future holds, as we develop the partnership further & keep working for another %