Tomasz Jasinski's Shosholoza Sold as U25 Schoolmaster for Alice Campanella 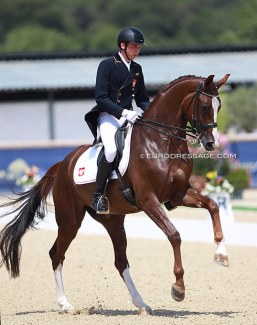 Shosholoza is a 14-year old Oldenburg mare by Sir Donnerhall x Furioso II). She is bred by Manfred and Brigitte Langelüddecke in Germany

The liver chestnut mare was first competed by Corinna Gaus in Germany as a 3-year old before she sold to Polish Grand Prix rider Katarzyna Milczarek.

Katarzyna's son Tomasz Jasinsk began riding the sensitive mare as a 4-year old and trained her to Under 25 level with the help of his mother.

He competed her at the 2015 European Young Riders Championships in Vidauban, where they finished 13th in the Kur to Music finals.  Jasinski competed her one more time at an international, the 2016 CDI Augustowek in Poland, where they won the team test and placed second in the individual.

Tomasz' attention shifted to other horses as well as show jumping, but he showed her occasionally in Poland.

The 21-year old Alice Campenalla has competed at no less than 9 European Championships from ponies to young riders level one five different ponies and horses. She is in her last year as a young rider.

This year Alice will continue her competition career at Young Riders and Under 25 level with two horses, Shosholoza and the Dutch warmblood mare Havanna (by Charmeur x Trento), who is originally named Hiciretha. Unfortunately Havanna suffered from a hoof abscess at the beginning of May, which might put a spanner in the works, but Dutch farrier Edwin Enzering and his team pulled magic on the hoof.

"Havana is back in the light training, but not sure if recovers fully to get qualifications," said Anna Campanella "Of course the plan is that she will still compete U25 this year, not sure if the European Championships for Young Riders of Under 25 are the goal. That depends of how quick Alice and Shosholoza can find their way together. We are grateful to Tomek (Tomasz Jasinski) for his trust. It was very important for him she went to a good home. Alice and Tomek know each other since they were small kids."