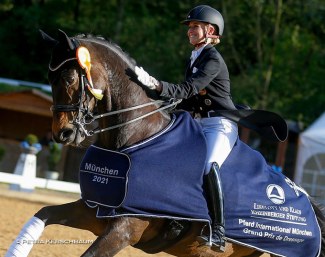 The 2021 CDI Munich became the turf for a first clash of the titans: Showtime and Dalera. The 2019 European Championship individual silver and bronze medal winners faced each other in the 4* Grand Prix class on Friday 14 May 2021 and it was ladies first.

The very best of German dressage has already appeared in the show ring at the 2021 CDI Hagen (April) and CDI Mannheim (begin May), but an actual confrontation between the most likely team horses (Bella Rose/Weihegold - Dalera - Showtime - Cosmo) so far had not taken place.

In Munich the first duel took place between Showtime and Dalera, but it must be said that it wasn't equal weapons for all. Jessica von Bredow-Werndl and Dalera already in the show rhythm after winning the Hagen Grand Prix, while Showtime had not competed in 21 months. In addition, Dorothee Schneider was riding with a fractured collarbone and needed a special vest to fixate her arm.

Of course that does not automatically mean that Schneider and Showtime would have won if they had more show routine and not a fracture. Wernd and Beatrice Burchler-Keller's 14-year old Trakehner mare Dalera (by Easy Game x Handryk) are in exceptional form and a pure pleasure to watch.

Although the halt was not entirely immobile the half passes were very rhythmical with wide crossing, light-footedness and good self carriage. The trot extensions could have come more from behind and shown a more open frame, but were still impressive. A very good halt and rein-back followed, with with no hesitation into trot. Proof of good submission. The piaffe was very clear in rhythm, easy and light-footed, but not completely off the forehand. it fitted the rules: "While giving the impression of remaining in place, there may be a visible inclination to advance, this being displayed by the Horse’s eager acceptance to move forward as soon as it is asked." The transitions were metronome like. Dalera was a bit hurried in her striding in the extended walk, but showed immediate stretching (7.9). The collected walk, however, was poor. The flying changes were ok and looked straight, but the horse could be more open in the throat latch. There was a hiccup at the end of the first pirouette, but Werndl quickly brought her under control. The second pirouette was good. The last trot diagonal was excellent and the horse remained motivated, eager, with the poll as highest point on the centerline. The piaffe at X was really good with a straightened front leg.

A 21-month (!!) break from competition has been well for Gabriele Kippert's 15-year old Hanoverian Showtime (by Sandro Hit x Rotspon). Dorothee Schneider presented the bay gelding in a new package: packed on with muscle, Showtime burst with energy and eagerness to go.

Their Grand Prix test began with a very good first trot extension, completely through the body and, for once in the pack of horses, really in front of the vertical. The half pass to the right should’ve had more bending, the half pass to the left was much better. The horse moved with great ease, fluency and in good rhythm. He produced a very good halt and rein-back, that was very submissive and willing. The second trot extension had a bit less lengthening of the frame. The piaffes showed more lift and energy than they did in 2019, but he is not carrying himself like Dalera does. The extended walk was good and Showtime produced a real collected walk, although the front legs were a tiny bit prancing. There was a small mistake at the end of the canter extension. His passage was the best in the field. Showtime no longer seems earthbound and grows 50 cm in the movements. It was really impressive, especially on the final centerline, which was wonderful. His last piaffe at X was by far the best one of the best he has ever shown.

The top three was completed by Isabell Werth on her number three in the barn, the 11-year old Quantaz (by Quaterback x Hohenstein), which sponsor Madeleine Winter-Schulze secured from Sissy Max-Theurer as an extra iron in the fire alongside Bella Rose, Weihegold and Emilio.

The bay German Sport Horse is no longer a stallion and made his international Grand Prix debut in 2020. Werth is still chiselling and polishing at this work in progress and the judges love what they see. The halt halt for the first halt was quite visible and the contact was often strong in the test with the horse visibly busy in the mouth. The trot extensions were rhythmical, energetic and the horse was in front of the vertical as should be. The halt for rein back was not immobile and the horse rushed into reserve. The piaffe was quite regular with lots of lift. The horse moved diligently but there was no real lowering of the haunches and his back is like a bath tub. The passage was even and active with good expression. The extended walk could have more overtrack. The pirouettes were fluent and in a good rhythm, but need to come more off the forehand. The last piaffe was the best one. Quantaz has a lot of expression and is a cute power house, but compared to Dalera or Showtime the real harmony is still missing. Werth „managed“ the horse well.