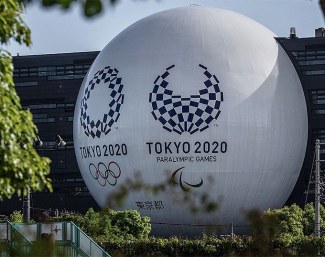 The call for cancellation of the 2021 Tokyo Olympic Games is growing each day.

With less than two months before the start of the Olympics on 22 July, widespread public opposition has been critiquing the International Olympic Committee (IOC) for its heavy-handed insistence to hold Games regardless of the coronavirus situation in Japan.

Japan declared a third COVID-19 state of emergency in the Tokyo, Osaka, Hyogo and Kyoto area on April 25 as infections have yet to significantly subside, leaving the medical system strained.

Only 2% of Japan's population has been vaccinated.

The state of emergency was extended from the initial end date of May 11 to May 31. Prime Minister Yoshihide Suga is set to decide on the length of the extension within the week after examining the latest infection and hospital occupancy data and consulting health experts.

Athletes Express Doubts About the Olympics

Daily voice is added to the chorus of athletes expressing doubts about either their presence at the Olympic Games this summer or whether the event should be held under current circumstances.

“I want the Olympics to happen, because I’m an athlete and that’s sort of what I have been waiting for my entire life,” said the number one seeded female tennis player Naomi Osaka (JPN). “For me, I feel like if it’s putting people at risk and if it’s making people very uncomfortable, then it definitely should be a discussion, which I think it is as of right now.”

In the equestrian world, number one show jumper Steve Guerdat (SUI) publicly questioned the legitimacy of the Tokyo Games from a humanitarian perspective, but as an athlete he chooses to go.

"I wonder about the organization of the Olympics, I wonder if it is legitimate to organize them or not on this date, given the situation and without an audience," Guerdat stated. "Part of me says yes, the other part says no, that’s what I explained. If the Games were canceled, I would have some understanding, because there are sick people, in Japan, as elsewhere. But my athletic side wants to go, of course. It is obvious that the Games are the dream of a lifetime, for all athletes, and I am one of them."

On Wednesday 26 May, the Japanese newspaper Asahi Shimbun, who is an official partner of TOKYO 2020, called for cancellation. The paper believes the risk to the public health and safety and the pressure the Games put on the Japense health system are too great.

"We ask Prime Minister Yoshihide Suga "to calmly and objectively assess the situation and decide on the cancellation of the event this summer," the paper wrote.

400,000 people have already signed the petition launched by Japanese lawyer Kenji Utsunomiya, who states that the IOC and other involved organisations are "forcibly pushing" to pursue the Tokyo Olympics. "Yet, as numbers show, the widespread outbreak of COVID19 has not at all been under control. While vaccination started at the end of last year, its distribution is limited to economically developed countries and thus the pandemic is far from over."

Utsunomiya demands the cancellation of the Tokyo Olympic Games "in order to protect our lives and well-being" and urges the Japanese government to "listen to the voices coming from Japan and across the world to cancel the games" and "Use the limited resources not to host the Olympics, but to protect our lives."

Recent polls show that as many as 83% of people in Japan do not want the Games to be held, with many fearing the arrival of about 80,000 officials, journalists and support staff could turn Tokyo 2020 into a coronavirus super-spreader event.

Only IOC can Cancel

The contract between the IOC and host city Tokyo makes it clear that only the IOC can cancel the event.

The IOC is thought to make around 70% of its money from broadcast rights, and around 18% from sponsorship. If the Games don't go ahead, it could severely damage the IOC's finances, and the future of the Olympic movement. If Tokyo was to break the contract and cancel against the will of the IOC, the risks and losses would fall on the Japanese side.

Prominent economist Takahide Kiuchi, executive economist at the Nomura Research Institute and a former Bank of Japan board member, warned that the ¥1.8tn ($16bn) Japan would lose from cancellation would be dwarfed by the economic hit from emergency measures imposed if the Olympics turn out to be a Covid-19 super-spreader.

“If the [Olympics] trigger the spread of infections and necessitate another emergency declaration, then the economic loss would be much greater than cancellation,” Kiuchi said in a report. The direct loss from a cancellation would be equivalent to a third of a percent of nominal gross domestic product (GDP) in fiscal 2020, he added.

In the Washington Post, Sally Jenkins posted a very convincing opinion piece on 5 May stating that Japan should cut its losses and tell the IOC to take its Olympic pillage somewhere else.

"Baron Von Ripper-off, a.k.a. IOC President Thomas Bach, and his attendants have a bad habit of ruining their hosts, like royals on tour who consume all the wheat sheaves in the province and leave stubble behind. Where, exactly, does the IOC get off imperiously insisting that the Games must go on, when fully 72 percent (editor's note: now already 83%) of the Japanese public is reluctant or unwilling to entertain 15,000 foreign athletes and officials in the midst of a pandemic?"

She continues, "the IOC derives its power strictly from the Olympic “host contract.” It’s a highly illuminating document that reveals much about the highhanded organization and how it leaves host nations with crippling debts. Seven pages are devoted to “medical services” the host must provide — free of charge — to anyone with an Olympic credential, including rooms at local hospitals expressly reserved for them and only them. Tokyo organizers have estimated they will need to divert about 10,000 medical workers to service the IOC’s demands."

Sacrifices Need to be Made

Thomas Bach, president of the IOC, has been criticised for referring to the “resilience” of the Japanese people. At a meeting of the International Hockey Federation he said, “The athletes definitely can make their Olympic dreams come true. We have to make some sacrifices to make this possible.”

While it was not clear to whom Bach was referring when he called for sacrifices to be made, many assumed he had the Japanese public in mind.

As the IOC has repeatedly insisted the Games can go ahead safely, even under a state of emergency, it seems there's little chance of it deciding to pull the plug.