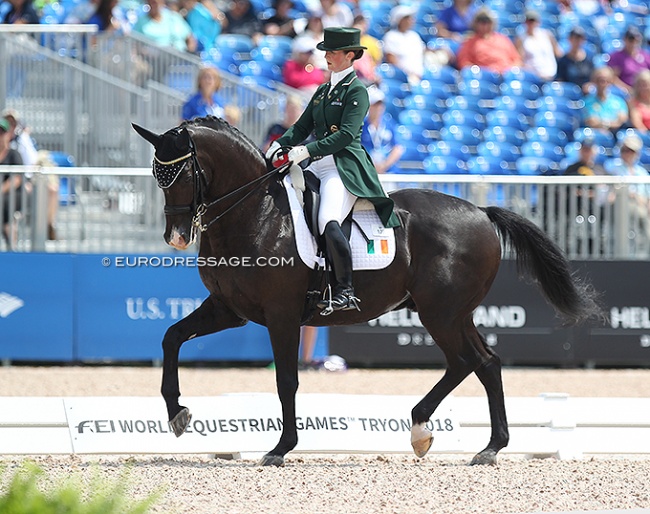 Judy Reynolds has decided to retire her top horse Vancouver K from competition sport. She will not be riding him on the historic, first ever Irish dressage team at the 2021 Tokyo Olympic Games.

Vancouver K is a 19-year old Dutch warmblood gelding by Jazz out of Phantasia (by Ferro). He is bred by G. Korver.

The black Jazz offspring never denied his parental genes and was quite a tricky horse at the start of his career, posing many challenges to his rider. Reynolds, however, persevered and became a trailblazer for Ireland

Their international show debut was at small tour level at the 2012 CDI Vejer de la Frontera where they scored 62.474% in the Prix St Georges. The pair had already competed in Vejer (ESP) in 2011 but in the national owners' classes. In 2014 they moved to Grand Prix level.

Reynolds and Vancouver were the anchors of the Irish team, which wrote history at the 2019 European Championship in Rotterdam by unlocking a team place for Ireland in Tokyo. Individually Reynolds and the 17-year old Vancouver K finished fifth in the Kur to Music finals with a record score of 85.589%, an absolute career highlight.

Vancouver struggled with some niggling injuries and this year never reached full top level fitness to be return to sport. The CDI-W Stuttgart in November 2019 became the horse's last international show. He placed 6th in the Kur with 80.755%.

"I know I’ve always said that JP would decide when it was time to retire but I’ve had to make that decision for him," said Judy. "This horse has more heart than anyone can imagine and at 19 he still tries to give me everything. Too much. I’ve decided that it’s time to stop asking."

She continued, "What a trip it’s been. A good horse can carry you all around the world and back again: 1 Olympic Final, 3 World Cup Finals, 1 WEG Final, 1 European Championship Final. A good record for any horse but a great one for a horse that many thought wasn’t good enough."

Reynolds had entered Vancouver K for the 2021 CDI Munich at the beginning of May but withdrew him and rode successor Leroy instead.

"Many people may ask why I’ve waited until now to make this decision but the fact is JP still wants to work and we have given him every chance to be able to perform on the world’s biggest stage one more time but alas it is not to be," she said.