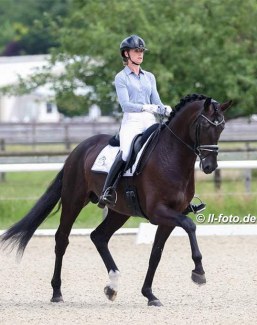 German selectors Monica Theodorescu, Reinhard Richenhagen, and Dietrich Plewa have announced the horses that are qualified to move on to the second German team selection trial for the 2021 World Young Horse Championships in Verden, Germany, in August.

The German Olympic Equestrian Committee (DOKR) carries out these selections of the German team horses. Two trials are held in Warendorf, the first one on 21 - 23 June, which includes a training day and a selection day. A long list of horses will be picked for the second selection trial on 26-27 July 2021.

Germany is eligible to send 7 horses per age division to the World Championships, which take place in Verden, Germany, the last weekend of August 2021.

Out of the entire group of selected horses,  only four mares were picked and five geldings. All other horses are (licensed) stallions.

The horses selected for the second trial are: