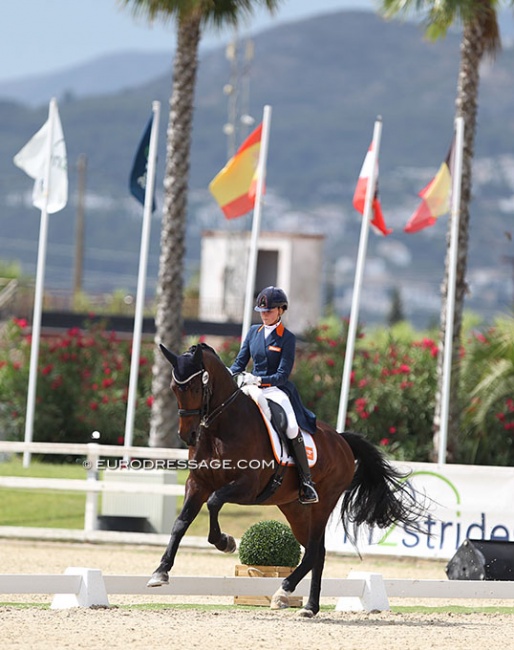 On the first day of competition at the 2021 European Junior Riders Championships in Oliva Nova, Spain, on 7 July 2021, team Germany has taken the lead in the team ranking even though the day high score came from Dutch rider Evi van Rooij on Don Tango B.

The first group of riders battled it out on Wednesday morning in the Junior Rider Team Championship test. While yesterday the temperature hit a sweltering 36° C for the horse inspection in the morning, the temperatures were much milder today with an overcast sky barring the piercing rays of sunshine that proved to be brutal on Tuesday.

The Team Championship test is judged by Elke Ebert (GER), Olivier Smeets (BEL), Magnus Ringmark (SWE), Hans Voser (SUI) and Alice Schwab (AUT) and while there ranking was very agreeable, some major discrepancies were to be seen between the judges.

Evi van Rooij and the tall and impressive 13-year old KWPN stallion Don Tango B (by Contango x Jazz) produced a very strong test in which the horse's powerful gaits were the highlight of the ride. Van Rooij did an excellent job bolstering all that power and energy even though the poll could have been more steadily as the highest point and the nose more out. The trot work was ground covering, but in the right lead not always as regular in the rhythm. The halt at entry was strong, the extended walk had two hooves overtrack , but the left turn on the haunches lacked some impulsion. The second trot extension was expansive and all flying changes were very confirmed although the fourth one was a bit short. They finished with an uphill canter.

Although the heat was bearable and with a breeze going, Van Rooij exerted herself with her focus to produce a strong test and to keep her massive horse in check. She came out of the arena hyperventilating and needed a bit of support and cool down from her team to regain her moment and experience the joy over her leading score. The judges rewarded her test with 73.879 although Voser had her at 71.515% and Ringmark at a whopping 77.576%!

Germany in the Lead

Team Germany, however, took the lead in the team ranking with 145.818 points, followed by The Netherlands with 143.697 points.  Germany's two riders for today were team newcomers Lena Merkt and Kenya Schwierking.

Lena Merkt overcame her stressy moment of the horse inspection where she struggled to present her 12-year old Hanoverian stallion Sarotti Mocca Sahne (by Soloman x Lauries Crusador xx). Although the horse was not naughty, she was not really able to keep him on a straight line for the trot up and needed some comforting and help from the judges to make her trot-up work.

Her team test, however, was more confident and solid with lovely, soft trot extensions a good half pass to the left and an overall good tempo in trot. The one to the right needed more bending and the rein back was a bit uneven. The extended walk has lots of overtrack but needed more marching and stretch in the topline and the collected walk was edgy in the rhythm before the turns on the haunches. The flying changes were a highlight, big and sweeping and overall the test was very clean and  nice, but the stallion consistently puts his tongue in and out in front and could be more accepting of the contact. They got 73.212% for a second place.

Former Children rider Kenya Schwierking is in her first year as a junior and on a new horse, the 9-year old Oldenburg mare Cecil (by Bordeaux x Alabaster). Their trot work was nice and soft footed, the rein back uneven, but the extended walk was good, although also in the right turn on the haunches there could have been more impulsion. The flying changes were big, but in canter there could have been a bit more self carriage and collection from behind, even though the extended canter was uphill and powerful. Also the bridle contact here could be lighter. They received 72.606% but the judges differed in opinion, with marks from 71.061% to 75.455%. She provisionally placed third.

Denmark Back in Bronze

Team Denmark is usually the perpetual bronze team medal chaser and nothing changed today, although their team best ride of the day could easily have scored a little bit more.

The Singapore based Annabelle Rehn and her 9-year old Danish stallion Vestervangs Garson (by De Noir x Ragazzo) produced a very strong trot tour with excellent engagement and ground cover. The halt for the rein back was not square but the extensions were nice. The extended walk was good in rhythm but there could have been more overstep, but the walk in between the pirouettes was outstanding, although one pirouette could have been more engaged. In canter the horse leans a bit more on the hand than in trot and does not stay as nicely up in the frame, especially on the left lead and in some of the changes, but overall it was a very consistent test that stood out by its easy way of going. She scored 71.515% for a provisional fourth place.

Sophia Ludvigsen and the 7-year old Danish mare Blue Hors Quintana (by Quantensprung.x Desperados) places fifth so far with 71.394%. The trot work was nicely ridden but the nose could be a bit more out. The canter work was clean, but the changes a little tense and could have flown more through the body.

The surprise performance came from Hungarian Mira Dicso on the 9-year old Hanoverian gelding Foxtrot (by Foundation x Furst Heinrich) who wowed the judges with his spectacular trot and canter, even though he tends to get croup high. They scored 71.212% for sixth place.

Belgian Clara Collard and the 11-year old KWPN gelding Escape (by Tuschinski x Kaiserstern) produced a very smooth ride in which especially the consistency in the frame stands out. The horse is very steady in the contact and with the poll up both in trot and canter, something which few riders are able to achieve. Unfortunately a jumper photographer at the short side by C behind the judges' boxes spooked the gelding in the extended trot, in which he broke into canter, but Collard recovered quickly. The test was mistake free and their 70.788% would easily have been more had it not been for the break. Their marks ranged from 68.939% to 74.848% though. Belgium is now certainly chasing Denmark for that coveted team bronze.

Swiss Renee Stadler piloted her 10-year old Hanoverian gelding Danzador (by Diamond Hit x Lauries Crusador xx) with a lot of skill through the test. The trot work flower, the extended walk had very good overtrack, but there could have been more of a V-moment in the rhythm. They scored no less than 70.182% even though the canter strike off and one flying change didn't work. They are 8th so far.