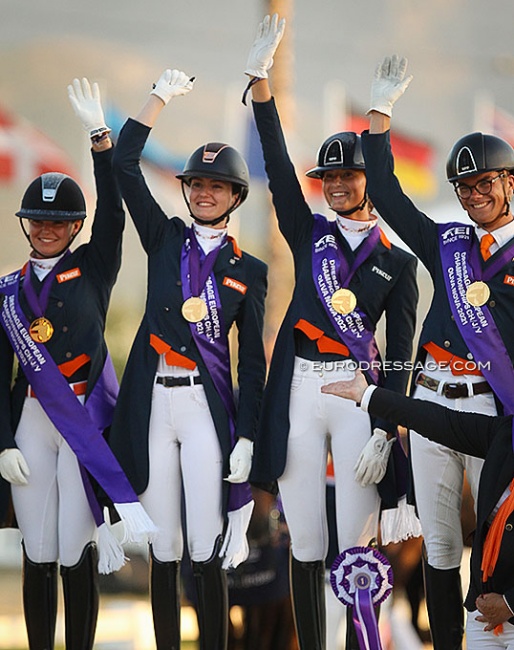 The Dutch dressage team dominated the team championship competition at the 2021 European Young Riders Championships in Oliva Nova, Spain, on Thursday 8 July 2021. The point gap was huge between the different teams on the podium. The Netherlands received top scores for three superior rides and left Team Germany far behind them with an almost 9% overall point difference. Denmark got bronze  with another 5 percentage points less than Germany, but felt the heat from home team Spain.

The Young Riders team competition concluded on Thursday evening at the MET equestrian centre in Oliva Nova. A nice sea breeze and lovely summer temperatures of 28° c made the competition bearable for riders and horses. The medal ceremony took place during sunset with a golden glow cast over the show grounds to celebrate a glorious conclusion of the nations' competition.

The Dutch team posted an impressive 225.530 point total that earned them an undisputed team gold medal. The Dutch campaign was spearheaded by the favourite for individual gold, Marten Luiten, who already earned individual gold and kur bronze at the 2020 European Young Riders Championships in Budapest (HUN) last year.

Marten Luiten and Willeke Bos' 11-year old KWPN mare Fynona (by Ampere x Gribaldi) were the supreme leaders of the class with an outstanding ride that earned them the victory with a score of 77.677%. Judges Francisco Guerra (ESP), Maria Colliander (FIN), Kurt Christensen (DEN), Thomas Lang (AUT) and Mariette Sanders-van Gansewinkel (NED) were unanimous in their scoring and all put Luiten first although marks ranged from 76.324 (Guerra) to 79.265 (Sanders-Van Gansewinkel).

Luiten and Fynona showed beautiful trot extensions with lenthening of stride and frame. The mare had a good balance on the voltes and Luiten regularly put the hands forward to create more length in the neck and to open the throat latch, something which was a big issue last year. Fynona has developed much and has an improved self carriage and is lighter in the contact. The left walk pirouette was a bit tense, the extended walk had two hooves overtrack, but the clarity in the rhythm could be a bit more pronounced, the relaxation was good though. The onset of the left canter pirouette was slightly crooked but the pirouette itself was super. The second half pirouette to the right was magnificent and even earned them a 10.  The tempi changes were straight.

The Netherlands' second best score came from Milou Dees on her own 11-year old KWPN gelding Francesco (by Florencio x Krack C). The duo were the overnight leaders, topping the board on Wednesday in group 1 with a 74.000%. This score ended up being good for a second place after group 2.

Thalia Rockx and the 10-year old home bred KWPN gelding Golden Dancer de la Fazenda (by Bretton Woods x Florestan) are having a great redemption time in Oliva Nova after they were eliminated in the team test at last year's Europeans in Budapest. In Spain the pieces of the puzzle came together and the sympathetic duo had a wonderful ride. The horse did twice halt in a stretched position, but the trot tour was well cadenced, even though this Bretton Woods offspring is quite slow behind. Rockx rode the horse was a nice energy, without vigorously having to spur him and he was soft and accepting in the bridle. The collected walk was clear in the rhythm and the extended had good overtrack and relaxation. The left canter half pirouette had a double beat behind, the right one was nice and small. Golden Dancer executed the tempi changes smoothly and the tall, long legged liver chestnut really gave a very obedient and willing impression, well ridden by Rockx. They scored 73.853% for a third place.

Germany Back to Silver

For the second year in a row, team Germany had to be content with the team silver medal. Their number one rider on the team, Luca Sophia Collin and the 11-year old Hanoverian gelding Descolari (by Desperados x Weltmeyer) could not save the day. Germany finished the silver medal spot with 216.294 points.

Collin and Descolari were the high scorers for Germany, finishing fourth with 73.118%. The black gelding has three exceptional basic gaits and while the contact is soft and the overall image a sympathetic one, the horse needs to seek the contact more. He bopped the head continuously in the very elastic trot work. The walk was clear in the rhythm in between the turns on the haunches, but the right turn was a bit big. The extended walk was exceptional. A few imperfections crept into the canter work which affected the total score: a crooked change at C, a big pirouette and crooked but uphill flying changes. The extended canter was on two tracks. Collin finished with an outstanding end halt though with the horse standing square and in balance.  The judges rewarded the ride with marks going from 71.471 (Colliander) to 75.000% (Christensen).

The second best score for Germany came from Helena Schmitz-Morkramer who piloted the 11-year old Brandenburger mare Lifestyle (by Lord Fantastic x Samba Hit) to a 72.647% score on Wednesday.

Germany's third contributing team score came from Anna Middelberg and the 10-year old Hanoverian gelding Blickfang HC (by Belissimo M x Brentano II) who ended in 9th place with 70.529%. The cute liver chestnut produced very well regulated trot work without any loss of rhythm in the voltes and lateral movements. However in walk there was a lack of impulsion which affected the turns on the haunches as well as the elasticity to maintain a clear 4-beat rhythm. The extended walk was very good though with a clear V-moment in the rhythm. In canter, however, Blickfang crept behind the vertical and had a double beat in the left pirouette as well as a mistake in the four tempi changes. The threes were straight.

The Danish team slotted in third with 211.295 points and earned the bronze team medal.

The campaign to bronze was spearheaded by routinier Sara Aagaard Hyrm on the 15-year old Danish warmblood gelding Skovborgs Romadinov (by Romanov x Mago xx). The liver chestnut has big, bouncy extended trots and lots of energy and forward go in the trot work, also on the voltes. There was a small hiccup in the left walk pirouette and the right one could have had a bit more impulsion. The extended walk was superb, with good rhythm and relaxation. In the right canter pirouette there was one stride in a double beat, but the tempi changes were straight. Overall the canter work was very solid and it was a convincing test. They scored 71.500% with marks going from 69.706% to 73.529%.

Laura Jarlkvist Rasmussen and the 17-year old Danish warmblood gelding Aatoftens Dornier (by De Noir) are now representing Denmark for the third time at a European Youth Championship, the first time in 2018 and again in 2020.  The experienced chestnut is always up for a reliable ride that scores well. The trot work was smooth but could have had a bit more power and spring, the canter work is accurate and there was only a small blemish in the right pirouette. They posted 70.883% for an 8th place.

The third Danish score was ridden on Wednesday by Sofie Hansen on the 12-year old Hanoverian gelding Dieu d'Amour (by Dimaggio x Rotspon). They ended up 15th in the ranking of the team test with 68.912%.

The Spanish team came very close to winning the bronze medal on home turf with a team total of 210.236 points, one percentage point short for a podium spot.

The Spanish effort was led by the last rider to go on the day, Sergio Moron Basoco on the 11-year old Dutch gelding Farnham L (by Furst Rousseau). He rode a personal best score of 71.206%. The long legged chestnut gelding has a very expressive front leg which reaches far in the flying changes and gives some personal style to his silhouette in trot. The extensions were well ridden, there was much forward energy in the traversal movements and the canter pirouettes were good. Overall the rider's hands could stay a bit more steady with less visible halt halting to perfect the overall image even more.

Spain's second best score was produced by Natalia Bacariza Danguillecourt on the 14-year old Hanoverian gelding Dhannie Ymas (by Don Crusador x Weltmeyer). Coached by Ton de Ridder, Bacariza rode one of her best tests so far on her long-time partner Dhannie. The horse was engaged and flowing in the trot work, the right walk pirouette was the best one, the extended walk had good overtrack and clarity of rhythm, but the nose could have been more out. The pirouettes were decent although a bit more collection would have worked well. The tempi changes are ground covering and straight and the final halt was square. They scored 70.265% for an 11th place.