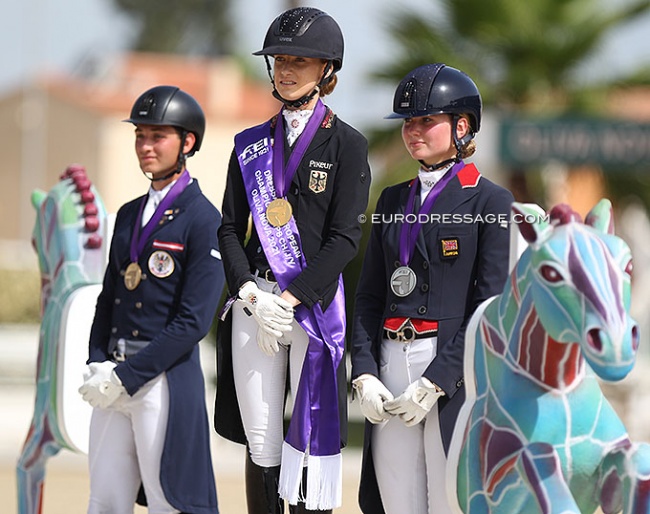 The last day of the competition started with the Junior’s and Children’s Final in the morning with start times as early as 8 am. The Young Riders Kur Final started later at 11:45 am.

Baumgurtel and the 9-year old Dutch warmblood gelding Hugo (by Spielberg x San Remo) lived up to all expectations this week by securing three gold medals. On the first day Baumgurtel rode a beautiful and accurate test but with some small blips, she still scored second and helped earn team Gold for Germany. Later on in the week though, in both the Individual and Freestyle Hugo and Baumgurtel rose to the occasion with two very sold tests, convincingly outsourcing their main competitor for individual gold, Annabella Pidgley and Sultan des Paluds (by Soliman x De Niro).

In the Freestyle Lucie was a hot favourite for Gold and started as the penultimate rider having Pidgley’s freshly posted 80.110% to beat. She rode to beautiful lyrical instrumental music (based in Thomas Bergersen's Colors of Love) with well choreographed transitions and a solid music composition.

The two began their freestyle with a very nice half pass sequence down the centerline consisting of thre short half passes, followed by two back to back short extended trot diagonals, after which she did a shoulder-in sequence. In the shoulder in right the horse went slightly off of the track, and the extended walk could have had more relaxation and overtrack. The half passes and the serpentine in the canter tour was a highlight. It is worth noting Lucie also used a lot of unique and comparatively very difficult lines throughout the test which were beautifully executed, and helped her earn well deserved high technical and difficulty marks. She without a doubt had one of the most if not the most interesting and sophisticated floor plan of the day, and did an outstanding performance even though she was slightly ahead of her music. Baumgurtel finished the test with a half pirouette at D and a one handed beautiful extended trot down the centerline to a halt. Generally Lucie had Hugo in a very nice consistent light contact with an uphill frame and great rhythm. The pair truly dominated the Freestyle division with an extremely sound test that earned them their third gold medal of the week.

The panel of 5 judges, consisting of Smeets (BEL), Ringmark (SWE), Ebert (GER), Schwab (AUT), and Voser (SUI) rewarded the rider with an impressive 82.045 total score. They unanimously placed her first, and the scores did not widely differ either with 84.0 (Ringmark) as a high score and 81.375 (Schwab and Voser) as low scores.

British Anabella Pidgley repeated her feat from the Individual test on Saturday and secured a second Individual Silver medal for herself, writing history for Great Britain as never before has a junior claimed a medal at the European Championships. Like in the Individual test Pidgley was a hot contender for gold but  was again only beaten by Baumgurtel, who performed right after Pidgley. A later start in the freestyle is always an advantage due to natural judging bias.

Unlike Baumgurtel, Pidgley does not have the most intricate floor plan and instead focused on longer and simpler lines. They rode to quiet, slightly understated instrumental music with nice matching transitions. Sultan and Annabella began with a nice halt and turned on to the track to do a shoulder in right. The shoulder in was rhythmical but there was an issue in the contact, she went on to do multiple half pass sequences after that which were nice and consistent.  Just like yesterday, and contrary to the first day, Sultan had a less consistent head position and sometimes went behind the vertical in the lateral movements especially. The extended walk was energetic and clear. The canter work appeared very secure with a nice right canter half pass. Pidgley managed to produce beautiful light footed trot and an upbeat canter. The transitions, canter half passes, and ground covering extensions were the highlights of the test.

In the end the duo earned an 80.110% overall from the panel of five judges for their freestyle; three judges had her second, two third, and one fourth. The scores ranged from 78.35 (Schwab) as a low score to 83.0 (Ringmark) as a high score

Austrian Paul Jöbstl proved himself again in the Freestyle by placing third once more, after a successful second day getting his first ever individual medal at the European championships, winning the bronze on Saturday in the Individual test.

An official combination for only 6 months, Paul Jöbstl and the 12-year old Hanoverian stallion Bodyguard (by Burlington x Pik L) seem to have gelled together very well and are on a medal/winning streak since their first international this year just a couple of months ago.

Jobstl started in the second set of riders right before Pidgley and Baumgurtel (they all went in a row in almost the reverse order that they ended up placing in) and had a high score to beat. The pair performed a combination of orchestral style music for the trot and walk and a medley of ‘Bella Ciao’ for the canter. For a European Youth Riders Championships it's nice to see riders selected modern, upbeat music with a clear "story line" instead of non-descript instrumental background music that leaves little to no impression nor any memory afterwards.

Uniquely, Jobstl was the only rider out of the 18 Junior Freestyle starters who began his test with a walk entrance and even more interestingly followed it by an extended walk. He did a short diagonal and half 15 m circle in extended walk, when he ended up on the centerline at around D and began to collect the walk, Bodyguard, twice breaking into canter instead of transitioning into trot. This error was not really reflected in the harmony score. Jöbstl nicely recollected him and they went on to do a very nice extended trot on to the centerline followed by a shoulder in (left) and another extended trot. The powerful stallion had great balance, showed uphill flying changes, good rhythm, and beautiful extensions, but seemed to be leaning on the hand in some parts of the test especially in the transitions, and had again a little bit more supple bend to to right then the left which was more visible in one of the trot half passes. The combination was one of the only ones to do a counter canter 10m circle which added to the difficulty score. The freestyle very successfully highlighted Bodyguard's strength especially in the canter work and the entire test with the exception of the mistake at the beginning was very nice to watch, if it were not for the mistake in the beginning the score could have had the potential to be higher. Jöbstl finished the test with a serpentine of changes between the quarter lines and a transition to a nice halt.

In the end the pair earned a 79.060%  score from the judging panel, the placing was again quite divided with two judges having them second, two third, one fourth, and one seventh, though again the score where quite consistent ranging from 77.75 (Ringmark) as a low score and 80.125 (Ebert) as a high score.

For the second start in a row Dutch Evi van Rooij and the 13-year old KWPN gelding Don Tango B (by Contango x Jazz) finished just outside the podium position and was fourth in the Freestyle.

Once again Evi did a very good job of presenting the big moving gelding, the highlights of the test being the extended trot and the expressive flying changes everywhere in the test. They started  off with a nicely rhythmically extended trot and half pass line sequence, in the latter of which the contact was briefly lost. There was a small hesitation in the left pirouette and in the transition from the walk to the canter there was a miscommunication where Don Tango started cantering from the wrong leg. Van Rooij rode two beautiful shoulder-ins especially the one to the left was very nice - but it did seem like the horse was opening his mouth in a couple of the steps and was trembling with his lip, revealing body tension. Evi rode to filmic music and particularly the canter bit worked well as it seemed to have been made to measure.

Van Rooij scored a total of 78.225, there was some difference in opinion of placing with one judge placing her second, one third, one fourth, two fifth, and one seventh, this greater difference of opinion was also reflected in the scores as the combination scored 75.15 (Voser) as a low score and 80.5 as a high score (Ringmark).

Alexander Yde Helgstrand rode to an ‘It’s Raining Men’ and 1980s themed freestyle in a very energetic rhythm, towards the end of the test it almost seemed overly rushed. They started off the test with an expressive extended trot, followed by a line of two half passes in which the mare tilted her head slightly in the half pass left, the half pass right was much better. Throughout the test the half passes varied in quality, the correct bending being the issue with the rider's hand sometimes crossing the withers. Some, especially in the canter, almost seemed sloppy as some where started with the quarters leading and did not have precise ending or starting points. The freestyle included interesting extended trot - shoulder in transitions to the centerline, quite a lot of extended trot as this is the mare's forté, and a lot of flying changes (14 approximately). This test probably had the most flying changes out of all of the Junior Freestyles, and the second half of the test which was the canter tour was almost entirely flying changes, some of them ridden on difficult circle lines. Two changes had clear issues but overall they are nicely uphill and ground covering. Overall the energy in the test was good, but Helgstrand seemed to chase medal glory a bit too much and overpaced himself in his freestyle. They scored 77.810% to place fifth.

Frederikke Gram Jacobsen rode her freestyle to instrumental music with Gaelic sounding flute arrangements based on the Games of Thromes theme song.

Gram Jacobsen and Ryvangs Zafina started their freestyle off to beautifully straight changes down the centerline, and went on to do another short diagonal with a transition to walk and a turn on the haunches right after. There was some tension in the collected walk and the extended walk lacked overtrack. Zafina can sometimes get very short in her body but there were very nice improvements today. The highlights of the test were the canter and trot half passes, and the very nice extended trot, and fluent transitions. The pair finished on a well earned 77.530%, with rankings by individual judges ranging between third and ninth, and scores between 74.925 (Vosser) and 80.000 (Ringmark).

Text by Fevroniya Barinova for Eurodressage