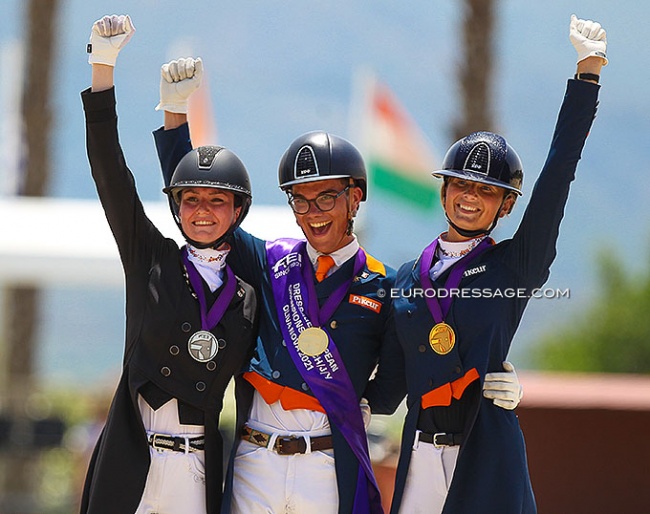 Luiten proved untouchable in the Kur to Music final after he already rode to convincing victories in the team and individual test.  The judging panel of Mariette Sanders-van Gansewinkel (NED), Kurt Christensen (DEN), Maria Colliander (FIN), Francisco Guerra Diaz (ESP) and Thomas Lang (AUT) were in complete agreement when putting him top of the order with a big score of 83.155%.

The long journey to the south of Spain, five long days of competition and the hot temperatures in sunny Oliva Nova had taken its toll on many horses, which appeared a bit tired and flat in the freestyle on Sunday.

Luiten was the across-the-board Freestyle winner, as Luiten stood out with the outstanding technical execution of his test. However, even his hot and temperamental 11-year old KWPN mare Fynona (by Ampere x Gribaldi) showed signs of tiredness and the extended canter as well as the trot work looked a bit less sparkling than before. There was a mistake in the rhythm in the trot extension, the two right extended canters were on the forehand.

The mare however was correct and obedient in the later movements, the halts were much better ridden without too much hand. The half pirouettes were ridden in the corners for support, the canter half passes were smooth.

Luiten topped the board with a unanimous winning score of 83.155 and completed a hattrick in Oliva Nova.

"During the whole competition season we were already in great shape and we really wanted to show that in Oliva Nova as well," said Luiten. "I feel like we had three good tests, I was very happy after each of them. Taking home three gold medals is an amazing feeling and I don't know the words to describe it, it feels awesome!"

Luiten has now collected no less than 8 medals as a junior/young rider. He scored three-time silver at the Junior European Championships in 2019 and had Young Rider double-gold last summer.

Rockx and Dees Make it a Dutch Podium

The Young Riders Freestyle finals had an all-Dutch podium as Thalia Rockx again took silver and this time Milou Dees got bronze.

"I'm also very proud of my team members, who also took team gold and some individual medals. A Dutch top three in the Freestyle was what we were wishing for, so I am also very proud of them and of course the whole Dutch team who are the best supporters you can wish for!", Luiten added.

Thalia Rockx and the 10-year old home bred KWPN gelding Golden Dancer de la Fazenda (by Bretton Woods x Florestan) rode to nicely arranged Avatar music in which the canter half passes right were particularly beautiful. The three tempi changes were correct but a bit flat and also in trot the horse appeared a bit tired in the hindleg with some head bopping in the lateral movements, clearly not being able to carry himself as well as in the two previous tests. Nevertheless, the pair produced good work with the horse elastic in the contact. They finished second on 78.050%

Milou Dees and her 11-year old KWPN gelding Francesco (by Florencio x Krack C) were back in third place and earned kur bronze on the last show day. The combination was third in the team test, produced a much better ride in the individual but mistakes made her drop on the leader board. In the Kur to Music, the pair had several highlights but the relaxation could have been better.

Francesco has a very bouncy trot, with much airtime but the gait needed to flow more in the half pass right. He tended to get a bit too passagy. The collected walk was tense with the horse pushing himself high and although the tall and beautiful horse achieved two hooves overstep in the walk extensions, he was not really relaxing over the back. The canter half passes were very well ridden, the four and three tempi changes were ridden on the centerline, but the changes to the right could have been straighter in the body. The extended canter was very well executed. They finished their ride with an extended trot. The pair scored 78.005% for third place.

Spanish Sergio Moron Basoco tasted podium potential in the individual test and was giving it his all in the freestyle.

Unlike a lot of combinations who choose to ride to rather non-descript dingeling ding background music that absolutely leaves no trademark, Moron Basoco confessed colour and chose bold rock music for his freestyle. With the support of his Spanish home crowd on the sideline, Moron and the 11-year old KWPN gelding Farnham L (by Furst Rousseau) rode with a lot of energy even though also his horse showed the strain of the week.

The horse started with a stretch halt and the right half passes could have been more regular, but the extended walk had good relaxation, rhythm and overtrack. They rode three tempi changes on a circle line, the left pirouette was a bit big and they finished their test with clapping and cheering from the audience with a one-handed canter on the centerline. Their score of 76.935% placed them first, not enough for the podium although the pair had certainly won the hearts of the crowds.

The Belgian combination Amber van den Steen and the 11-year old KWPN gelding Fame (by Ampere x Sultano) have been knocking on the door for a top ranking for years, but coming from an obscure little dressage country, they never seemed to get the recognized for their riding, which they deserved.

The tables were finally turned in Oliva Nova and Van den Steen completed the top five in the freestyle with 74.530%. This was the second best result ever achieved by a Belgian Young Rider in history. In 2014 Jorinde Verwimp won freestyle bronze on Tiamo at the European YR Championships in Arezzo.

The sympathetic dark bay gelding Fame was still fresh and rhythmical in trot and showed good balance on both leads. The collected walk was clear, but in the extended he is not really able to cover much ground. The degree of technical difficult was high with four tempi changes on the centerline, a left half pirouette, three tempi changes on the centerline, a right half pirouette and then an extended canter. The horse was correct in the execution of the movements and throughout had a nice contact in the bridle.

Eurodressage was on the scene at the 2021 Europeans and photographed almost (!) all riders. If you are interested in prints or photos for social media, send us an email with your name.