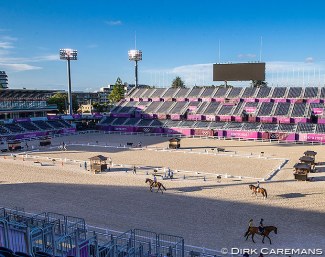 Just two days before the Grand Prix class begins at the 2021 Olympic Games in Tokyo - the ultimate competition for elite level dressage riders and sports athletes - I can't help but reflect on David Stickland's article on Eurodressage, in which he discussed the Top 10 highest scoring combinations in dressage, per movement.

A New Wave of Horses

With the Olympics are rapidly approaching and the best of the best competing against each other, it will be up to the judges to set the benchmark for the sport and decide which is the leading dressage pair in the world of the past lustrum. Valegro's retirement, right after the 2016 Rio Olympics, opened the gaits to a new wave of dressage horses that have been dominating the sport these past five years.

After a single flash appearance at the 2014 World Equestrian Games, Isabell Werth's Bella Rose returned to the stage in 2018 and has been a number one at WEG in 2018 and the Euros in 2019. Jessica von Bredow-Werndl (GER) has been climbing the ladder with Dalera and is considered one of the top favourites for individual gold. Dujardin (GBR) and Dufour (DEN) proved they are no one-hit wonders and made their come back one new top horses, such as Mount St. John Freestyle, Gio, Bohemian and Vamos Amigos. Carl Hester (GBR) continues to build one fabulous horse after another with exceptional training. Edward Gal (NED) is always good for pulling a new young Grand Prix horse out of his hat, Danish newcomer Carine Cassoe Kruth (DEN) has been perfecting the Grand Prix moves on her mare Heiline's Danciera, and then you have two Americans who, based on scores ridden in the U.S.A., could be the jack-out-of-the box, Adrienne Lyle and Sabine Schut-Kery. Of course there are quite a few other horses that could peak in Tokyo with scores over 75%. And don't count out Germany's third individual medal contender, Dorothee Schneider, but she's riding her second Olympics on routinier Showtime and not really part of the new wave of horses.

A heavy burden lies on the shoulders of the Olympic panel of judges. Katrina Wust (GER), Andrew Gardner (GBR), Francis Verbeek (NED), Hans-Christian Matthiesen (DEN), Janet Foy (USA), Susie Hoevenaars (AUS), and Magnus Ringmark (SWE) will have to do the sorting in a new Olympic format with a heat system that could bring surprise individual finalists into the freestyle.

These judges will need to pick the team and individual medalists, decide who are the best of the best that deserve eternal Olympic glory, the highest distinction in sports. In a high performance athlete's life nothing carries more weight, purpose and meaning than an Olympic title or medal. Unencumbered by personal taste, friendship or business relations with riders or trainers, or by patriotic interest, these judges are the guardians of our dressage sport and they decide the future of our sport.

Their scores are the message. They determine what good "dressage" looks like and what dressage celebrates. Normally their assessment is based on the classical principles, but a more modern "version" of the sport has been now elbowing its way to the top of the scoreboard over the past two decades. Fortunately in most recent years a softer, lighter, more harmonious way of riding has been rewarded, but in my opinion judges don't take weigh that enough.

Even the best riders in the world get away with training flaws because they ride horses of stellar quality, thanks to the improved breeding of modern sport horses. Big name athletes are revered so much that no matter which horse they present, high scores flash on the board.

This is where the shoe does not seems to fit. This more generous scoring of the divas of dressage seems to curtail the motivation and ambition of up and coming riders.

Are the Big Names Overscored, or the Lesser Gods Underscored?

I was a bit surprised to see David Stickland's article on the Top 10 scoring horses per movement. Sure all the big name and high scoring pairs are in those statistics, but with some movements I'm wondering why some horses are even in that ranking? Especially some names listed in the piaffe top 10 made me frown and turn the wrinkles on my forehead into the Grand Canyon.

Let's be fair. International dressage judging, especially at top sport Grand Prix level, has improved dramatically the past ten years. The half point system, seven judges, the Judging Supervisory Panel, and the Degree of Difficulty are all improvements that have led to a more streamlined and synchronous judging. I think the last, majorly shocking judging errata date back to Michael Eilberg at the 2013 Europeans and Rath on Totilas at the 2015 Europeans. But since then the panels have been co-operating much better and there have been no more major banana slips at the (inter)continental Championships.

Over the last few years I am quite in agreement with most of the judging at Grand Prix Championships (youth sport is something different) and there is less need of critical reviews, thankfully. However, the only point I continuously hark back to is that big names are often overscored. When their horses do an extended trot like a sewing machine (short steps, no ground over, no lengthening of frame), they get a 7. When their horse is totally lateral in the extended walk, they get a 6.5 or a 7 (instead of a 4), when the single tempi changes cover 10 meters of the entire diagonal they get 7s or 8s, when their horse piaffes not in a clear 2-beat rhythm, but pulls the legs up to their belly, rocking back and forth with wide open front legs, croup high and leaning on the forehand, or even worse, crossing the front or hind legs, they score 8,9s and 10s (see Top 10 piaffe scores!)? What about the problematic judging of the rein back?

And  then you have the issues of movements that "look good," but the horse has a mouth that is dead or tense with a tongue either retracted or showing? I often feel that contact, submission, and relaxation are not enough taken into account when super moving horses obediently execute their pretty movements to the rider's wishes. There is a particular leniency towards real submission when it concerns the big heroes of our sport. It is understandable that they get 10s for  immaculate transitions, phenomenal pirouettes, but why are some vital aspects of dressage disregarded when it concerns a star athlete?

Thinking Outside the Box

I often wonder if this is a psychological type of bias. Once a rider gets this "top star" status, s/he is put in the "box" of "world elite". Their green Grand Prix horses - still in full development, of which the training is far from perfect, and the execution of movements in the test shaky - will score equally mega marks. Is this because judges reward the promise and talent that is latent but not shown in the ring, yet?

I think this is a big stumbling block for the promotion of dressage. In order to keep dressage riders motivated, it is essential that also the lesser gods get the points they ride for and don't get stuck in their "drawer" of  always the same score, 65% - 68% - 70% - 72%. When there is progress, it needs to be rewarded. How often have we seen judges, who see a combination for the first time, appear clueless with their points. Following peer review after the test, their score suddenly is "corrected" on the second day of competition in the next class.

A lot of riders of smaller dressage nations or with unknown names put in the miles, compete show after show, on very good horses, and still don't get the points they deserve. However, once you have a "name" and are in that upper echelon, the points are thrown like confetti.. the judging hardly go down anymore. It almost feels like that when a lesser known rider enters the arena, the judging starts at 70%  and will only go down if it's not good. When a big name rides up the centerline, the starting point is 80%.

Eurodressage's Silke Rottermann has written an incredible series of articles on the 1964 Olympic Games in Tokyo. Her first instalment described the trials and tribulations the judging system underwent after scandalous patriotic judging at the  1956 Olympic Games in Stockholm. It led to the team competition being cancelled for the 1960 Games.

A new panel of judges served in Tokyo in 1964 which saw the team competition return to the programme. Feeling the heat and pressure of doing a professional job - unbiased and unhindered by personal taste - the three judges Gustaf Nyblaeus, Georges Margot and Frantisek Jandl bravely stepped over their own shadow and assessed what they saw.

With the 2021 edition of the Tokyo Olympic Games round the corner, I hope the experienced panel of seven judges will be as brave! I hope they have the courage to score (lesser known) riders high for good execution, yet that they  be brave enough to go down with points when the relaxation and harmony a well as the correct, classical execution of a movement, are not there, no matter how fancy the name of the one sitting in the saddle riding for Olympic glory.