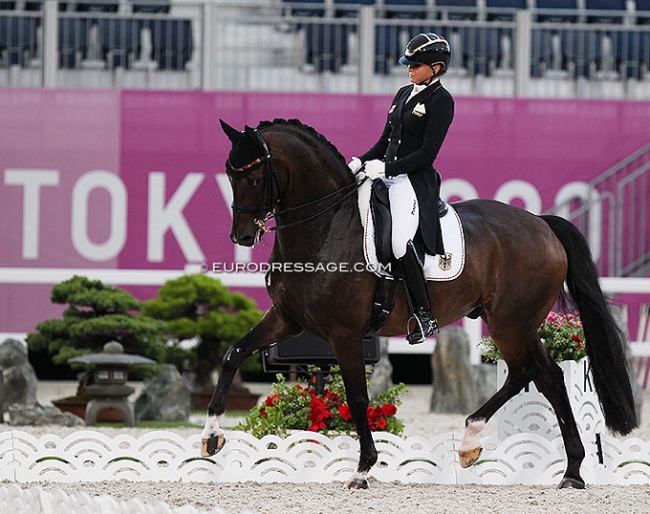 Dorothee Schneider has withdrawn her number one Showtime from competing on the German team at the 2021 European Dressage Championships in Hagen next week.

"Showi has sustained a minor injury and can unfortunately not start at the Europeans in Hagen next week," Schneider explained. "After Tokyo I wanted to show one more time in which great shape Showi and I are. Unfortunately that won't happen."

Schneider was selected with Showtime but had her second horse Faustus (by Falsterbo x Forrest xx) as immediate reserve. The bay Hanoverian will now substitute and join the German team.

"It will be his first Championships," said Schneider. "Although I'm sad that Showi and I can't dance next week, I'm happy that Faustus gets the chance. He's in top shape, which he proved at the 4* in Crozet."

Schneider and Showtime won team gold at the 2021 Tokyo Olympics and although favourites for an individual medal, ended up 15th in the freestyle. Schneider's second horse Faustus is bred by Heino Bruns and was initially owned by Andreas Bruns, before selling for 36,000 euro at the 2013 Hanoverian Summer Auction. Owned by Gestut Fohlenhof he was the 2018 Otto Lorke Prize winner.