Weihegold to Retire from Sport in Frankfurt or Leipzig 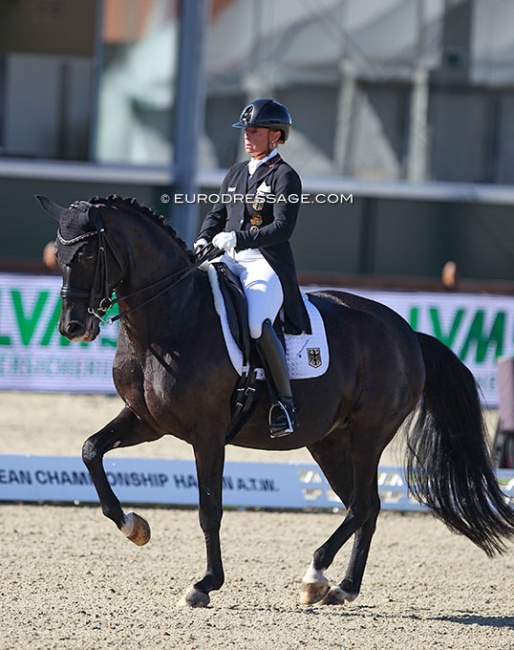 Christine Arns-Krogman, owner of Isabell Werth's multiple medal winning mare Weihegold, has confirmed that the 16-year old mare will be retired from competition sport either at the CDI-W Frankfurt in December 2021 or at the 2022 World Cup Finals in Leipzig.

Weihegold made her big break through under Isabell Werth's assistant trainer Beatrice Buchwald (now Hoffrogge). In 2013 the pair won the Nurnberger Burgpokal Finals and in 2014 they claimed the Louisdor Cup Finals.

Werth competed her once at international Grand Prix level at the 2014 CDI Oldenburg and took over the ride from Buchwald permanently in January 2016. Their first CDI together was the CDI-W Amsterdam, where they placed sixth in the Grand Prix with 75.920% and won the freestyle with 83.450%.

In January 2016 Isabell Werth secured the ride on Weihegold by having her sponsor Madeleine Winter-Schulze and the Klaus Rheinberger Foundation sign a contract for the sport rights on the mare until the Rio Olympics.

This contract was extended until the 2020 Olympic Games in Tokyo, but due to the postponement of the Games it got renewed until the end of the year 2021.

Arns-Krogman retained the general ownership as well as the breeding rights to the mare and has flushed numerous embryos from Weihegold for her breeding programme over the years.

In 2016 Weihegold took over the number one spot in the barn from Don Johnson, who was Isabell's team medal winning ride at the 2015 European Championships in Aachen. The 2014 WEG team gold medal winning Bella Rose at the time was recovering from injury.

Werth and Weihegold won team gold and individual silver at the 2016 Olympic Games in Rio and team and double individual gold at the 2017 European Dressage Championships in Gothenburg. They won the World Cup Finals three years in a row in 2017, 2018 and 2019.

In 2018 Bella Rose returned to the competition arena and became the number one in Werth's barn again, riding to gold medals at the 2018 World Equestrian Games, 2019 European Championships and 2021 Olympics in Tokyo.

Six weeks after Tokyo, Werth rode Weihegold in the 2021 European Championships in Hagen, where they got team gold, GP Special silver and placed fourth in the Kur.

Retirement in Frankfurt or Leipzig

With the sports contract coming to a close at the end of December 2021, Arns-Krogman sat down with Werth to discuss the future of her mare, who will turn 17 in 2022.

Christine confirmed to Eurodressage that Weihegold might do a few more World Cup shows, but in the spring of 2022 she was definitely be retired from sport and return home to become a broodmare.

"Our plans are not yet fixed," said Arns-Krogman. "Initially it is thought that we will go to Lyon, Stockholm and Frankfurt. Whether we will say goodbye to her in Frankfurt, where her “great” career began, or whether she will only have her say goodbye in Leipzig at the World Cup has not yet been decided. In any case, she comes to our farm afterwards and should have her own foal and hopefully spend many years in good health with us on the pasture."