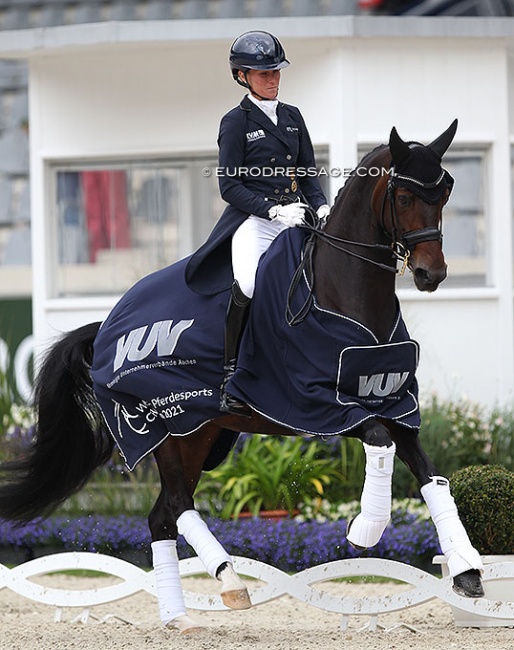 The 2021 CDIO Aachen kicked off on Thursday morning 16 September 2021 with the Prix St Georges class, which was won by Helen Langehanenberg on the very elegant mare, Schöne Scarlett.

The 2021 CHIO Aachen is taking place in a very different edition with limited spectator capacity due to corona. The organizers were only allowed to sell tickets to 30% of its capacity, although the local authorities increased that amount to 50% at the start of the week.

In the 2020 corona year, the CHIO was initially postponed to the month of September and then eventually called off, the first time a CHIO Aachen ever got cancelled since 1898 (!), although no shows were held during World War II.

With not only the Olympic Games taking place in Tokyo this summer as well as the European Dressage Championships in Hagen last week, the CHIO Aachen was not able to attract the world super stars to its show as those horses are not having a rest. This meant that many top riders are bringing their second or third horses, or riders from nations otherwise not invited now get a chance to compete at this prestigious venue.

The opening class of the CDIO Aachen was the Prix St Georges, which featured a field of 13 riders covering four different continents.

Helen Langehanenberg and the 8-year old Hanoverian mare Schöne Scarlett (by Scolari x Londonderry) topped the board with a convincing ride in which the elegant mare showed lovely tempi changes and ability to collect in the half pirouettes. She was crooked at times, but still produced quality work.

"We spent that time practicing Grand Prix exercises,” Helen Langehanenberg explained about the horse's five month absence from the show ring. “She was totally unimpressed (in the Aachen arena). When it comes to her character, she is simply a dream!"

While Helen did not bring a big tour horse with her to Aachen, second placed Frederic Wandres has a full programme with three horses to compete in Aachen. Aboard his small tour ride Quizmaster, Hof Kasselmann's 9-year old Hanoverian by Quasar de Charry x Velten Third, he showed much confirmation in the small tour movements and produced a 75.059% score to become the runner-up.

A beautifully pregnant Emmelie Scholtens returned to the international arena after a break of four months with Ad Valk's 8-year old KWPN stallion Indian Rock (by Apache x Vivaldi). The gorgeous dark bay breeding stallion with the most picturesque face is a very talented mover, but needs to develop a bit more strength from behind. He obediently listened to his rider's aids and posted 74.500% on the leader board for third place.

A pair definitely to watch is Spanish duo Guillermo Garcia Ayala and the 9-year old PRE stallion Poeta de Susaeta (by Cacique IX x Oficial XXIX). Owned by the breeder, the black stallion competed at the 2017 and 2018 World Young Horse Championships and made his international small tour debut last May at the CDI Camarma de Esteruelas in Spain. This was the duo's first ride at FEI level outside Spain - aside from Ermelo of course - and they definitely stood their ground in a field of very established professional riders. They scored a well earned 72.176% for fifth place.

German A-team rider Carina Scholz presented a much matured 9-year old Hanoverian mare Quadrophenia (by Quasar de Charry x Hochadel), who competed at the 2019 World Young Horse Championships finals for 7-year olds in Ermelo, where she appeared quite intimidated by the surroundings. In Aachen, she was smooth and showed great talent for the future. They were sixth with 71.529%.

Matthias Rath has a lovely developing Prix St Georges horse in the licensed stallion Thiago GS (by Totilas x Warkant), who is home bred by his step mom Ann Kathrin Linsenhoff out of her international Grand Prix mare Wahajama. The compact Oldenburg stallion has lovely gaits, but could be a bit more steady in the connection. He scored 71.147% for seventh place.