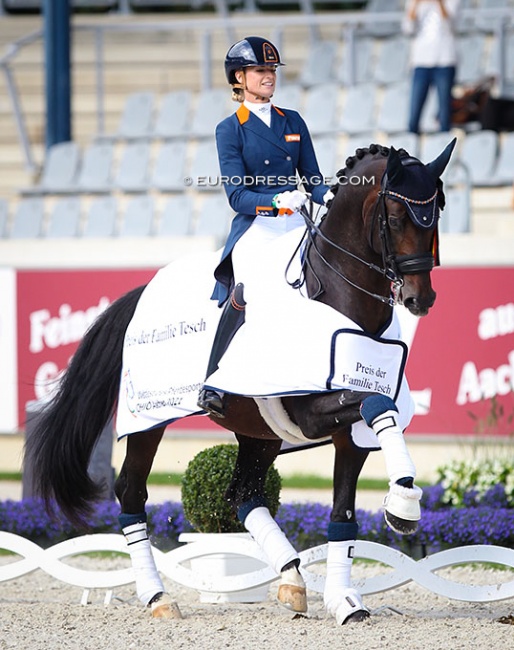 Dinja van Liere, the new star on the Dutch dressage firmament, has booked a sensational victory in the 5* Grand Prix at the 2021 CDIO Aachen on Friday 17 September 2021.

The New Face of Dutch Dressage

Dinja van Liere is not a new comer to international dressage sport, but her career has mainly focused on training and competing young horses. She is a medal winning rider at the World Young Horse Championships, Just like Hans Peter Minderhoud and Emmelie Scholtens, before making her introduction to Grand Prix.

Van Liere has slowly worked her way up and this year is has become HER year reaching the highest echelon of international dressage sport. She was the Dutch team reserve for the 2021 Olympics with Haute Couture after the FEI refused to accept her number one Hermes as a team option because his ownership paperwork was not made in order on time before the 15 January 2021 deadline.  Dinja travelled with number two, Haute Couture, to Tokyo and opted to ride her at the 2021 European Championships in Hagen last week, finishing 10th in the Kur to Music finals.

It looked like a strategic choice to save Hermes for the CDIO Aachen instead of the European Championships. With all the biggest horse names absent from Aachen after a tiring summer show schedule, Hermes would be the one in best shape and with the least miles able to make a splash in the highly important CDIO 5* tour in Aachen. The strategy worked out and Van Liere made an impact, launching herself as the "New Face of Dutch Dressage" with a riding that is light, harmonious and less pressured looking.

Aboard Joop van Uytert's 9-year old KWPN stallion Hermes (by Easy Game x Flemmingh) produced an excellent ride with the piaffe passage work as highlights. The half passes had great crossing. The rein back had a bit of resistance in the bridle and the horse changed lead in the extended canter. The pirouettes were small but still a bit laboured. The walk was well ridden.  The ride was excellent with even more promise for the future.

The judging panels the first two days in Aachen had been overall generous with their points and it was no difference in the CDIO Grand Prix. Van Liere clearly produced the best ride of the day and deservedly had the winning score. The judges rewarded it with 78.022%, but their individual marks ranged from 76.848% to 79.891%. The 5* Grand Prix was judged by Katrina Wuest, Magnus Ringmark, Francis Verbeek-van Rooy, Andrew Gardner, and Susan Hoevenaars. Three ranked Van Liere first, one judge had the pair second and one third.

“This is a dream come true. Simply amazing!” said Van Liere after her victory. It was the first time Dinja competing in Aachen and she walked off with the victory straight away. “Is that actually allowed the first time round?” joked her colleague, Patrik Kittel, who finished in third place.

Van Liere has a rather unconventional trainer, the Western reining rider Rieky Young-Burgmeijer, who also taught Olympian Anky van Grunsven the basics of Western riding. Van Liere: “The special thing about her, is that she really has feeling for horses. It doesn’t matter whether one rides dressage, jumping or Western.”

Fry and Kittel Make Up the Top Three

Second place went to the British rider, Charlotte Fry with her own and Gert-Jan van Olst's 13-year old KWPN gelding Dark Legend (by Zucchero x Tango). The passage was off the ground, the tempi changes were straight and correct. Dark Legend lost some clarity in the 3-beat rhythm in the extended canter and the trot half passes, although very elegant and lightfooted, could have more crossing behind. The judges rewarded her test with 76.717% and the individual marks were fairly synchronous.

The 25-year-old, who has been living with the Van Olst family in the Netherlands for years, has had an incredible year – team bronze at the Olympic Games in Tokyo, team silver at the European Championships in Hagen, gold at the World Championships of the Young Dressage Horses in Verden.

“That is really an important year in my career. Being placed in Aachen is the icing on the class,” she said overjoyed, especially “that we came here and showed what we can do.”

Swedish Patrik Kittel has only recently taken over the ride on the 11-year old Danish warmblood Fiontini (by Fassbinder x Romanov) from Andreas Helgstrand and is already collecting high scores on the fabulously moving mare. Fiontini has three outstanding paces with an exceptional extended walk. While still strong in the bridle contact and swaying with the hindquarters in the tempi changes, the horse is feeling more settled in the Grand Prix now. She breathes heavily though, but is fit and willing to do the work. The pair scored 76.261%. Two judges had them first, two fourth and one sixth. The marks ranged from 74.891% and 78.152%

It has been a long time since that there hasn’t been a German in the top three in the CDIO Grand Prix on home turf in Aachen.

Isabell Werth brought her third Grand Prix horse, the 11-year old stallion Quantaz (by Quaterback x Hohenstein) to Aachen. The bay gelding must have missed some consistency in training over the summer with Werth absent, competing in Tokyo and Hagen, and the horse did not looked as fine tuned in the Grand Prix. There were issues in the bridle contact from the start, although Werth tried to solve them gracefully in the test. In the one tempi changes, however, he took off and pulled out, prompting Isabell to make an emergency brake. This affected the score a lot. The two tempi changes were nice and straight though and the trot half passes were regular and ground covering. However, the lateral, collected walk (after C) surprisingly still earned the pair a 7.2. They finished on 76.130%.

Frederic Wandres and the 14-year old Hanoverian Duke of Britain are one of Germany's most reliable pairs, always good for consistent performances. They placed fifth with 75.848 %, while Olympic champion Jessica von Bredow-Werndl brought her new number two to Aachen, the 12-year old Hanoverian gelding Ferdinand BB (by Florencio x Lanciano) who is only at the start of his international Grand Prix career. The bay has lovely uphill tempi changes but still is croup high in the piaffe. They posted 74.348% for sixth place.

Although Germany was not in the top three, the country still holds the team lead in the nations' ranking.

This year there is a new Nations' Cup formation in Aachen with two riders move on to Saturday's Grand Prix Special and two to the Grand Prix Kur.  All three count for the team classification. The rankings the riders achieved in these classes are converted into points (first place = 1 point, etc.). The team with the lowest points wins. In addition to the Grand Prix, only the top three rankings from the Special and the Freestyle count.