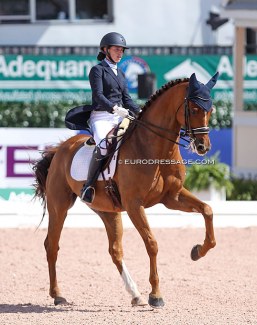 The internationally competed small tour horse Zen has passed away on 19 September 2021. Zen was shown at CDI's by no less than four riders from two continents between 2018 and 2020.

Zen was a 17-year old Dutch warmblood gelding by Riant out of Lierania (by Belisar x Nabuur). He was bred by G. Zantinge in The Netherlands.

He was owned by Verzendaal dressage in Holland before selling to the U.S.A. In the early 2010s he was initially owned by Tess Gilder and then sold to Nicole Levy,  who showed him nationally between 2014 and 2017, before selling him to Katlyn Flett. She became registered as his owner with the FEI in 2017. In 2020 the FEI listed him as owned by Jan Fedaryck.

Zen proved to be a very rideable horse taking no less than four riders from two continents into the international dressage arena.

He made his CDI show debut at the 2018 CDI Wellington in March 2018 under Samora Mayumi Uemura from the Dominican Republic, who was coached by Olympian Yvonne Losos de Muniz.

Four months later the liver chestnut competed at the 2018 Central American and Caribbean Games in Bogota (COL) with Stephanie Engstrom Koch (DOM) and finished 10th in the Inter I kur to music and earned team silver.

Two months later, in September 2018, American Katlyn Flett made her international debut on Zen at the 2018 CDI Devon. They went on to compete at the 2019 Global Dressage Festival before Venezuelan Patricia Ferrando took over in the spring of 2019 and rode him at the CDI's in Canada (Ottawa, Caledon, Thornton) before riding him at the 2019 Pan American Games in Lima, Peru, where Ferrando and Zen finished 12th in the Kur finals.

Flett was back onboard in 2020 and rode him at one CDI in Wellington on 6 - 9 February 2020, the horse's last international. In the summer of 2020 they placed eight at the 2020 U.S. Small Tour Championships. After that Zen continued at national Fourth level under new owner Jan Fedaryck.

Unfortunately Zen passed away on Sunday 19 September 2021 with his owner by his side.

"Our hearts are empty because he’s no longer here, but full from the love we shared. Many of you knew Zen as the happiest horse in the barn, always in need of a good neck scratch or treat, and taught so many riders how to be the perfect dance partner," Flett took to Facebook. "His honest work ethic, forgiveness, and happy demeanor made him the perfect horse. He took so many riders to the FEI and CDI levels in his career but was also able babysit the young ones on the track. He did it all with a sense of confidence in himself and trust in his rider. His pirouettes and half passes were a dream to ride and his afternoon snuggles were the best part of my day."

Trainer Yvonne Losos de Muniz added, "Zen was an amazing partner and teacher to so many riders at regional and continental championships, including Pan Am Games. He was kind, generous and a pleasure to work with, and will be sorely missed."