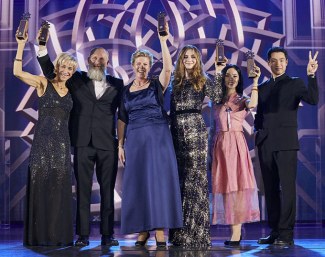 An impressive list of nominees are in the race for the FEI Awards 2021 as the online public voting opens today for the FEI Best Athlete, FEI Rising Star, FEI Best Groom, FEI Against All Odds and FEI Solidarity Awards.

Peder Fredericson, who helped take Sweden to its first Team Jumping Olympic gold medal in almost 100 years in Tokyo, is one of four nominees for the FEI Best Athlete Award. The other nominees in this category are Eventing’s first female Olympic champion Julia Krajewski who won individual gold for Germany in Tokyo, and compatriot Jessica von Bredow-Werndl who took double Olympic gold in Dressage. Sir Lee Pearson, Great Britain’s ‘Godfather of Para Dressage’ and the most successful Para Dressage athlete of all time with 17 Paralympic medals, completes the list of nominees in this category.

The FEI Rising Star category includes Greta Busacker (GER) who is the daughter of 2020 winner of the decade and Eventing legend Ingrid Klimke. And for the first time ever, this year‘s nominees include two National Federations in the FEI Against All Odds and the FEI Solidarity categories.

The Japanese National Federation has been nominated for the support they provided to the Organising Committee of Tokyo 2020 to deliver safe and successful equestrian events, against all the odds created by the ongoing pandemic. The Hellenic Equestrian Federation nomination for the FEI Solidarity Award is in recognition of their efforts to evacuate 300 horses from areas in Greece rampaged by wildfires in August 2021.

The shortlisted nominees have been selected for their outstanding achievements on the field of play, inspirational outlook and unparalleled dedication to equestrian and para equestrian sport.

The FEI received a diverse number of nominations for equestrian athletes, individuals and projects this year and the winners will be announced at a highly anticipated gala dinner in Antwerp (BEL) on 17 November. This will be the first in-person celebration of the winners since the FEI Awards Gala 2019 presented by Longines at the Kremlin in Moscow (RUS).

The amazing stories of all the nominees in the five categories can be found here.

The public now has 13 days (5 to 17 October) to cast their votes for their heroes. Make sure you have your say and vote here!

The shortlisted nominees for the FEI Awards 2021 are:

FEI Best Athlete - paying tribute to the athlete who over the past year has demonstrated exceptional skill and taken the sport to a new level.

FEI Rising Star – for the youth athlete aged 14 to 21 who demonstrates outstanding sporting talent and commitment.

FEI Best Groom - for the behind-the-scenes hero who ensures the horses they look after are given the best possible care.

FEI Against All Odds - for an inspiring individual who has pursued their equestrian ambitions and overcome challenges and obstacles along the way.

FEI Solidarity - for an FEI Solidarity or equestrian development project, an individual or organisation that has used skill, dedication and energy to expand the sport.

The winners will be decided by combining 50% of the public’s vote and 50% of the judges’ vote for the final result. The nine expert judges for this year’s FEI Awards are: