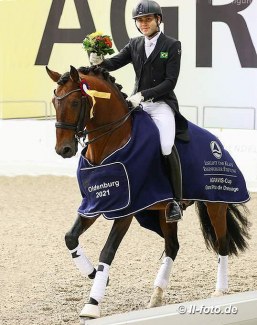 A mass exodus from this event took place on Friday  29 October as the footing conditions at this indoor show proved to be below par on Thursday, with a slippery underground that did not provide enough grip for the horses.

The entire show scheduled got reshuffled as a last minute effort to fix the footing was carried out on Thursday night through Friday. The damage, however, was done and the majority of riders did not want to risk the health of their horses, competing on Saturday or Sunday. They left the show.

"Together with the footing specialists, the organizer is making an effort to give the entire new footing from Footing Company Schmidt GmbG & Co the wished for quality," Escon Marketing communicated. "We found out that the problems arose from the mixing ratio of the sand that was used for the indoor riding arenas. Ground works started the night before (Thursday night) without making the necessary progress. With the approval of the exhibition centre company - and on the recommendation of footings specialists, lime was added to the footing to increase the consistency and strength (on Friday)."

The Louisdor Cup warm-up round with 14 pairs in it was ridden on Thursday. The Finals class on Saturday morning had only two of them left: Sophia Funke and Susanne Krohn.

Due to the bad ground conditions in Oldenburg, the responsible authorities, i.e. the Dressage Committee of the German Olympic Equestrian Committee (DOKR) and the 5* judge Dr. Evi Eisenhardt, as a member of the board of the Liselott Schindling Foundation, decided that the warm-up round, the Intermediaire II, will be counted as the final qualification.

German Olympic gold medalist Dorothee Schneider stated that, "the footing in the warm-up ring in the EWE Hall was unfortunately extremely deep and slippery. Even though they tried to fix it to the best ability, it was possible to train yesterday evening after the last test in the show arena, but also in the competition hall the footing was on the limit (of acceptable)."

Dorothee continued, "This morning (Friday) there was no improvement to be noticed. I don't want to risk injuries to my horses. It's a great pity but the conditions have to be optimal for my horses. I don't compromise when it comes to health and welfare of my horses."

In a field of five left-over starters, Brazilian Joao Marcari Oliva and the 12-year old Lusitano stallion Escorial Horsecampline (by Spartacus CSM x Edo RHE) topped the board with 71.065%.

"Another milestone achieved by Campline Horses' team," said Escorial's owner Thiago Montavani. "The 1st ever Lusitano stallion winning a CDI4* in Germany. The 1st time the Brazilian anthem is played in a 4* International Grand Prix. Our team is lost for words. The team’s hard work and vision are paying off. After beating records in Tokyo, Hagen and Aachen, they made history with the victory in the GP CDI4* Oldenburg. We are here to stay! We are here to make a difference"