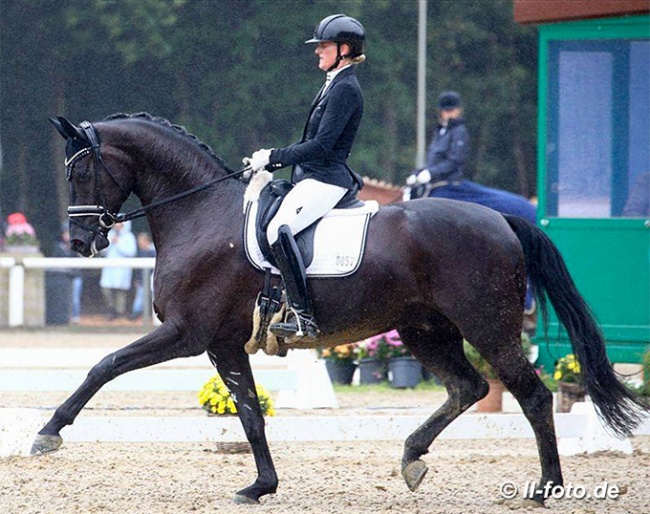 Chuck Bass is a 7-year old Westfalian by Cennin out of Rosalie (by Rosentau x Ravallo x Matcho AA). He is bred by Helga Schwätzler.

Trained by Kira Goerens-Ripphoff, the bay made his show debut as a 4-year old in 2018. In 2019 he qualified for the Bundeschampionate and placed 21st in the 5-year old dressage horse finals in Warendorf.

In 2020 he moved up to M-level as a 6-year old and re-qualified for the prestigious Bundeschampionate, where he finished 14th in the 6-year old finals after winning the consolation finals.

In June 2021 Chuck Bass made the transition to S-level  and in the summer he won the Prix St Georges Special in Elmlohe and placed fifth in Schenefeld. Most recently, in October 2021, he showed in the developing Prix St Georges horse class held at the Ankum indoor event.

Chuck Bass was owned by Austrian premier league soccer player Martin Harnik and his wife Sharon, who kept him in training with Goerens-Ripphoff for the past four years. He has now been sold to another renowned German soccer duo, Thomas and Lisa Müller.

"I had an incredibly fun time with this horse and he has now found the best home you can think of," said Kira, joking that, "he came to us more than three years ago and it was more love at second and third sight. He was a very special character, sensitive, focused on humans, but definitely afraid of everything new. With patience and time, which we gave to him, he learnt to show his exceptional quality and work mentality for the rider."

The Müllers run a dressage training and breeding station, Gut Wettlkam, in the south of Germany.

After a two year break due to injury, Lisa Müller's number one Grand Prix horse Stand by Me (by Stedinger) made his come back to the competition arena in September 2021. A month later she won the Grand Prix with 74.70% at the national show at Gut Winkelacker. Müller has two further Grand Prix horses to ride, D'Avie and Quantum Vis.