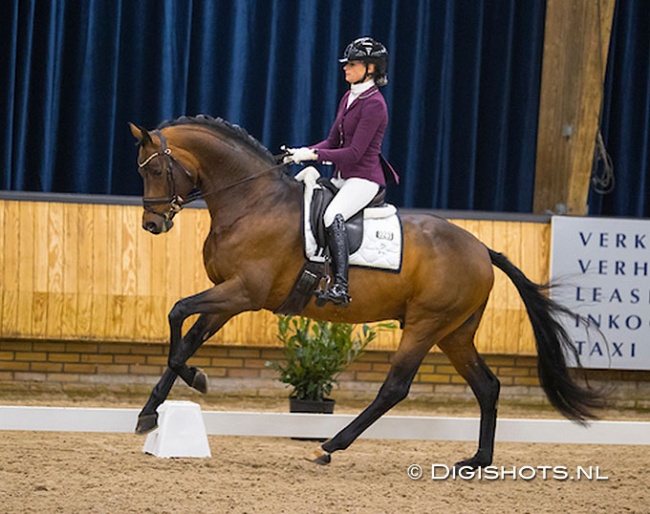 The 4-year old McLaren, the 5-year old Las Vegas, and the 6-year old Taminiau became the winners of the second leg of the 2021-2022 KWPN Stallion Competition circuit held in Ermelo on 16 November 2021.

The trio were the identical winners of the first leg, which kicked off in Kronenberg on 25 October 2021.

The 4-year olds are presented in an L-level dressage test, which was judged by Joyce Heuitink and Bart Bax.

Dutch European Championship team rider Dinja van Liere steered her two stallions to place one and three. Aboard Eugene Reesink's German bred McLaren (by Morricone x Sir Donnerhall) van Liere scored a winning total of 90 points. The walk scored 8, the trot 9 and the canter 9.5. The judges praised him for his expression, light footedness and being the complete package.

Swedish Jessica Lynn Thomas piloted Gestut Schafhof's Maddox Mart (by Hennessy x Bordeaux) to second place with 87 points. The walk got an 8.5, the trot a 9 and the canter 8.5.  Van Liere and Mauro (by Zonik x Negro), owned by stud farm Turfhorst and Eugene Reesink, was third with 85 points, scoring 8.5 for all three basic gaits.

The 5-year olds competed at Dutch M-level (German L-level) and WCYH finalist Las Vegas (by Ferdeaux x Wynton) topped the board under Franka Loos with 91 points. The massive bay stallion is owned by Nico Witte and De Dalhoeve and received 8.5 for walk, 9.5 for trot and 9 for canter.

Saskia van Es and Lord Romantic (by Don Romantic x Krack C) became the runners-up with 82 points, receiving 8 for walk 8.5 for trot and 8 for canter.  After two months radio silence since the 2021 European Championships, Adelinde Cornelissen returned to the competition ring (and social media), placing third on Lloyd (by Governor x Charmeur), which she owns togethed with Gerard Korbeld. The stallion got an 8.5 for walk, 8 for trot and 8 for canter.

Hans Peter Minderhoud and the German bred Taminiau (by Toto Jr x Sandro Hit) topped the Z-level division in which only three stallions competed. He scored the highest total of 90 points with a 9 for walk, 9 for trot and 9.5 for canter.

Marieke van der Putten and the imposing Jameson (by  Zack x Negro) landed second place with 85 points. The impressive black continues to struggle with nerves and fails to show a walk. He got a 6.5 for that gait. He impressed with his scope and power in trot (10) and canter (9).  The chestnut Jheronimus (by Dream Boy x Jazz) placed third with 80 points. He got 8 for walk and trot, and 7.5 for canter.