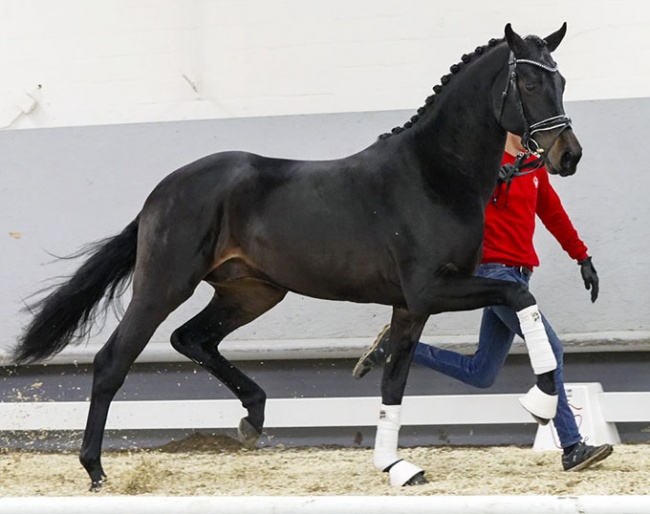 For many internationally successful dressage horses, the starting point for their careers was at the Westphalian auction place. Whether as a riding horse, licensed stallion, foal or unridden youngster, talents are discovered in Münster-Handorf. The professionals know this just as well as ambitious amateur riders.

To get in the mood for the Christmas season, the Westfälisches Pferdestammbuch offers promising young dressage horses for sale in an online auction. The highly interesting lot includes 38 stallions and geldings born in 2019.

The second reserve winner of his licensing in 2016, Zoom, is represented four times as a sire. Under the saddle of the Olympic rider Helen Langehaneberg, the Zack son has now been victorious up to advanced level dressage classes. The first vintage of his sons impressed at the German licensing places a year ago. Up to now the state stud stallion of the North Rhine-Westphalian State Stud has delivered high-priced auction horses and foals in Westphalia several times.

The former winner of the Nuremberg Burgpokal, Vitalis provides three offspring in this auction. A fortnight ago, one of his sons trotted to the top price at the Westphalian Stallion Sales, right after he has been celebrated as Reserve Champion at the Main Licensing in Münster-Handorf. Vitalis offspring have often impressed at various riding horse auctions, sold for high prices and advanced to successful dressage horses. For example, the Vitalis daughter Valencia, who was once sold at the Westphalian auction and is now collecting international merits under the saddle of Fabienne Müller-Lütkemeier.

Franziskus, the successful horse of Ingrid Klimke from Münster, is not an unknown sire either. Successful sport horses and licensed stallions have the Grand Prix star, who is based in Westphalia, as their sire. He is also the sire of three of the current auction candidates. One of them is the full brother of the licensed French Open with the head number 1. The first offspring of the World Champion Jovian and the premium stallion Fürst Samarant are also eagerly awaited. Both stallions have two offspring in this auction.

Bids for the young talents from Westphalia can already be placed at onlineauction.westfalenpferde.de.

On St. Nicholas Day, December 6th, the youngster auction for dressage horses will end in an exciting BidUp starting at 7.30 pm.

In order to give interested parties a good impression of the young talents, photo and video material is available. The Westphalian sales team will be happy to answer all questions about the auction candidates and will be on hand to offer advice and assistance in choosing the right youngster for each demand.