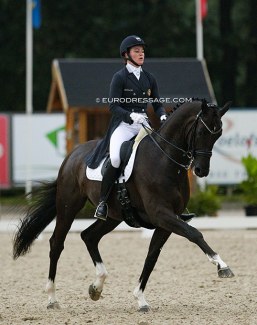 Empire B is a 12-year old Dutch warmblood gelding by Sting out of Wendy (by OO Seven). He is bred by H.P. Koele in The Netherlands.

The black gelding was first owned and competed by Sanne Boeve in The Netherlands.

Empire B sold to Norwegian junior rider Alexandra Andresen, who after her successes as a junior on Belamour, made the transition to Young Riders' level with the Dutch warmblood.

The Andresen family spent the winter of 2017-2018 in Wellington, Florida, where Alexandra rode hi in two CDI's. Her last international on Empire B was in Uggerhalne in May 2018.

Uggerhalne turned out to be Alexandra's last show in her career. The now 25-year old Norwegian had to give up riding because she suffers from spinal stenosis, a degenerative disc disease.

In 2018 she suffered from recurrent bulging discs in addition to the stenosis and had almost a year off from riding. By September 2019 she was back in the saddle but never made it to the show ring.

Empire B was sent to Helgstrand to be sold and found a new owner in British based Irish dressage rider Fenella Quinn.

The gelding arrived in her barn six weeks ago and the pair made its show debut this weekend at the national show at Keysoe. They placed second in the Prix St Georges, "with just a smidge under 70%," and eighth in the Intermediaire I on Saturday and won twice on Sunday.