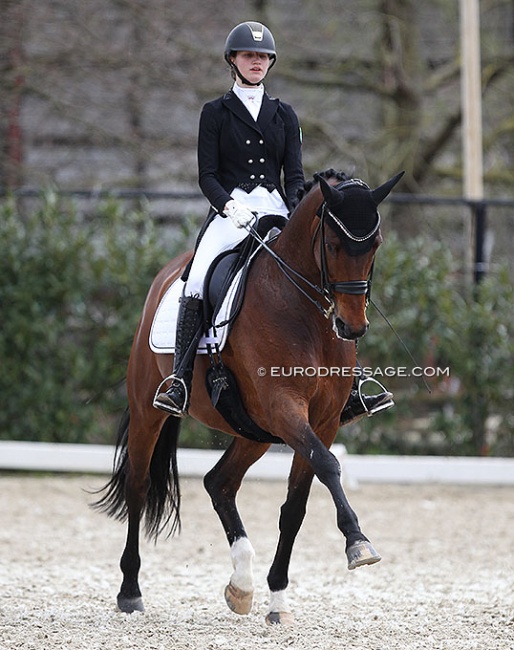 Emma Lienert has lost her young rider's horse Barack Obama to colic. He was 15 years old.

Barack Obama was a Dutch warmblood by Jazz out of Mariosa W (by Abantos x Purioso). He was bred by W. Verschuren and originally named Borus W.

The tall sensitive bay gelding started his sport career in The Netherlands.

In 2010 he competed in the Pavo Cup semi-finals with Dominique Filion and finished 46th. He was already named Barack Obama then and still a stallion.

In 2014 he was shown in Holland as an 8-year old by Tatiana Makarova. The horse was owned by horse dealership Westrade stable.

In 2017 Barack Obama had moved to  Germany and was shown at M-level by Stephanie Hegemann. A year later it was Stefan Wieser in the saddle.

Barack Obama sold to German junior Luca Collin, but the pair only had a brief time together.

In December 2018 Luca showed Barack Obama for the first time, but after that alternated the ride with coaches Jochen and Christina Bender in 2019.

In 2020 the ride on Barack Obama was given to German junior Emma Caecila Lienert to ride.

Barack Obama appeared a very sensitive horse to ride and Lienert needed help from trainer Pawel Dabrowski, who first competed him in the summer of 2020 before Lienert began campaigning him in 2021.

Lienert made her CDI debut in April 2021 at the CDI Sint-Truiden, where she finished third and second. A month later Dabrowski rode him again at a national show before Emma took him to the CDI Exloo, followed by the CDI Kronberg and Meerle. At the latter CDI she placed second in the individual test. It was their last CDI together.  Their last national show was in Bergisch Gladbach in August 2021.

Barack Obama suffered a severe colic attack and unfortunately could not be saved. He passed away on 11 December 2021.

"He was one of the most important horses, that we got to know, "Lienert commented. "He thought me more about myself than anyone else. Our shared goals were too short, but valuable nonetheless."

She continued, "colic is the invisible enemy, which pulled him out of our lives unexpectedly. Yesterday we had planned to ride our first S-level test, but fate didn't go along with our plans. He didn't deserve this."