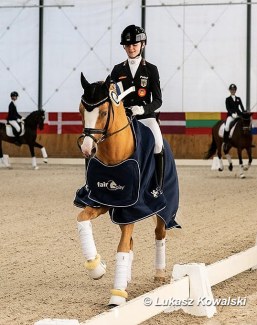 He was licensed at the Westfalian Pony Licensing in Münster-Handorf.

Rose's mom Kristy Oatley purchased Herzkonig from Duen in the late spring of 2019. He was ridden by Shona Benner at the time.

Herzkonig became Rose's second iron in the fire alongside her number one in the barn, Daddy Moon. The Westfalian stallion was never able to compete the quality and results that Daddy Moon produced and the stallion only did one CDI in the 2.5 years he was with Oatley.

The new combination made its national show debut in Buchholz in February 2020 and competed lightly at local events in Germany that year.  A long break between October 2020 and July 2021 followed and they returned to the arena in Elmshorn in the summer of 2021. Their first international was in October in Zakrzow, Poland, where they won the team and individual test with 75 - 73% scores and placed second in the Kur.

Herzkonig has now moved on to a new rider as the rising 15-year old Oatley has Daddy Moon and already begun focusing on horses and junior as well as young rider level competition with Rock Revolution.

Szeivolt and Mysterious Golden Bink were fourth at the 2021 Hungarian Pony Championships.