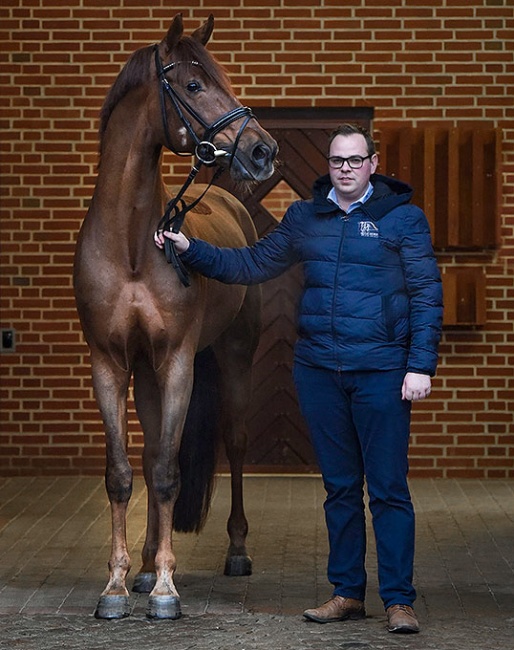 Baron is a 2013 born Hanoverian stallion by Benicio out of Snoopje (by Sir Donnerhall x Friedensfurst). He is bred by Albrecht Middelkampf in Germany and is WFFS negative.

He initially sold as a foal to Sweden at the 2013 Hanoverian Elite Foal Auction and was first approved for breeding at the 2016 Danish Warmblood Stallion Licensing. He successfully completed his 10-day observation test in Denmark with flying colours. In the autumn of 2016 he was a high scorer at the 35-day Stallion Performance Test achieving more than 800 points.

In December 2016 Baron was purchased by Gestut Westfalenhof in Germany. They took him back to Denmark in March 2017 where he was licensed for life at the Danish Warmblood Stallion Licensing in Herning after a fantastic in hand and under saddle presentation.

The stallion stood up for stud at Westfalenhof since then and has been approved for Hanover, Oldenburg, Westfalen, Rhineland, all south German studbooks. He was only once competed by Kathrin Sudhölter in June 2017.

Baron has now been acquired by Blue Hors stud and has moved to Denmark.

"Baron is a fantastic stallion who without a problems convinced both Jens (Meyer) and I with his abilities in both breeding and sport," said Martin Klavsen, Blue Hors' breeding director. "There is no doubt that he will be an exciting addition to this year's stallion collection - and we are excited about the opportunity to be able to present him to all our breeders and the Danish audience as soon as possible."

Baron has sired five licensed sons so far of which son Barça is submitted in studbook I. He sired four state premium mares in Germany as well as Bonsai, a Hanoverian mare test winner in Denmark.