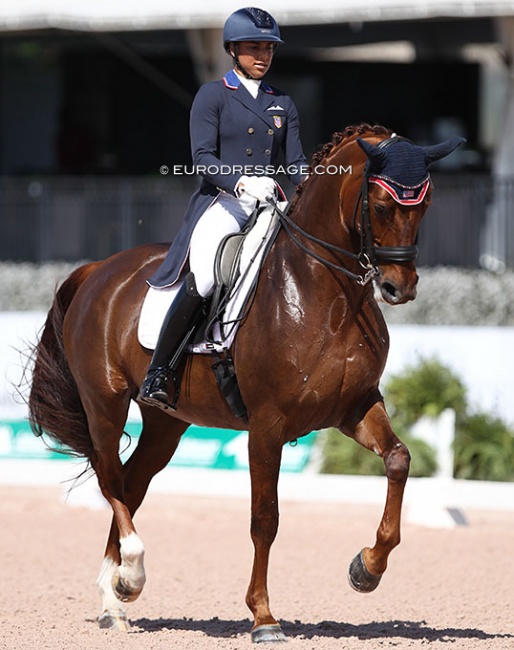 The 27-year-old Anna Buffini pulled off the ride of her life on FRH Davinia La Douce at the 2022 Palm Beach Dressage Derby on Friday 4 March 2022 to not only win the CDI-W Kur to Music with a personal best, but also book herself a place at the 2022 World Cup Final in April.

Buffini’s 79.265% eclipsed second-placed Brittany Fraser-Beaulieu’s (CAN) efforts on All In by just 0.12 percentage points. Alice Tarjan (USA) continued her successful streak on home-produced horses to fill third with a new career high score of 77.64% on Donatella M.

With American Ashley Holzer already having secured her ticket to the World Cup Final in Leipzig (GER) earlier this season, the final (of two) ticket was up for grabs yesterday afternoon. Three riders were in close contention for the World Cup spot: Buffini, Canadian Fraser-Beaulieu, and rookie Codi Harrison.

Buffini was awarded two scores over 80% from the panel of five judges and recorded her first ever CDI win aboard the horse bought from Germany’s Anabel Balkenhol two years ago.

On qualifying for the World Cup Final, she said: “It’s totally surreal. I really didn’t let myself think about it because I never want to assume. If we could go in there and do the test I knew she could do, I knew we could get a great score, but it’s my tenth grand prix in my life or so, and we’re still figuring it out.”

Buffini and the 15-year-old daughter of Don Frederico finished fourth in the qualifying grand prix, but she managed to iron out the kinks for their freestyle performance — in which the rider sings herself — gaining the golden ticket to the Final. This will be the first senior championship for Buffini.

“I learn so much after I make mistakes, and we made mistakes yesterday,” she explained. “We fixed that in the warm-up today, and we came out and I was not going to let that happen again. It was our most solid test we’ve ever done. Her canter work was super today. Her pirouettes were very good — we had trouble with those yesterday — and her passage is always a highlight.

"Ultimate Goal in Life is to meet BTS"

“If I could only ride freestyles the rest of my life, that’s what I’d do. Music and horses are my two passions and if I wasn’t a rider, I’d be a singer, so to have both in the same arena, and now to go to the World Cup, I am literally living my dreams,” added Buffini, whose music features the South Korean boy band BTS. “I love BTS so much. I always tell people, my ultimate goal in life is not just the Olympics. It’s to go to the Olympics so I can do a BTS freestyle, so I can meet BTS.”

Buffini will now re-route, and rather than flying home to California, will begin organizing her and Davinia’s trip to Europe for the Final: “Now I have to think about Germany, which is amazing,” she concluded. “This little miracle mare that people didn’t really expect much of is now going to the World Cup. It’s surreal.”

Buffini also recently added the triple World Young Horse Champion Fiontini (by Fassbinder) to her string of horses and her debut is eagerly awaited as it will be Anna's second iron in the fire for a U.S. team spot for the World Championships in Herning later this year.