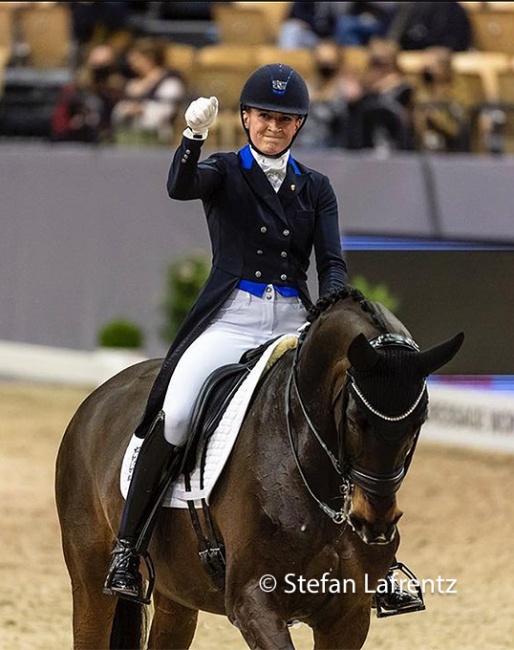 The FEI World Cup Finals are the winter season highlight competition of the year at which only 18 combinations from across the globe are eligible to compete and two of them come from Blue Hors.

She kicked off her World Cup campaign at the CDI-W Herning on her Tokyo Olympic ride Blue Hors Zack, and then switched to presenting her 2021 European Championship team silver medal winning ride, Atterupgaards Orthilia (by Gribaldi x Donnerschlag x Rambo), for the qualifiers in Lyon, London, and Neumunster.

The 28-year old Merrald and Agnete Kirk Thinggaard's 17-year old Oldenburg mare Orthilia have gone from strength to strength, bumping their freestyle score from 78.904% at the European Champtionships to 83.695% at the CDI-W Lyon and even to a whopping 84.480% in Neumunster last month.

"Since the Europeans I have found a better connection with Orthilia, and it gives me a better frame," Merrald told Eurodressage.

The pair rides to music arranged by the Dutch Joost Peeters. She looks forward to showcase their progress in Leipzig.

"I really like the freestyle of Orthilia, it’s a piano freestyle which I enjoy a lot," Merrald added. "It’s made for her and fits her perfectly."

"Zepter is super," Kittel told Eurodressage. "I love him. He has the best attitude and with all qualities, he always wants to work."

Zepter has been produced to Grand Prix level by former Blue Hors rider Daniel Bachmann Andersen and served as a schoolmaster for Spaniard Cristian Tudela Ruiz, before Kittel began competing him in Neumunster, where they posted 81.325% in the freestyle for a 6th place.

Taking advantage of the newly changed World Cup rule that one start sufficed for World Cup Finals' qualification, Kittel has chosen to ride the more experienced Zepter over his younger green Grand Prix horse.  They will be competing to Patrik's "Billy Idol" freestyle, arranged by Michael Erdmann.

"I know that music the best and we have not been a couple for so long, so want to give Zepter a good experience," Kittel added.