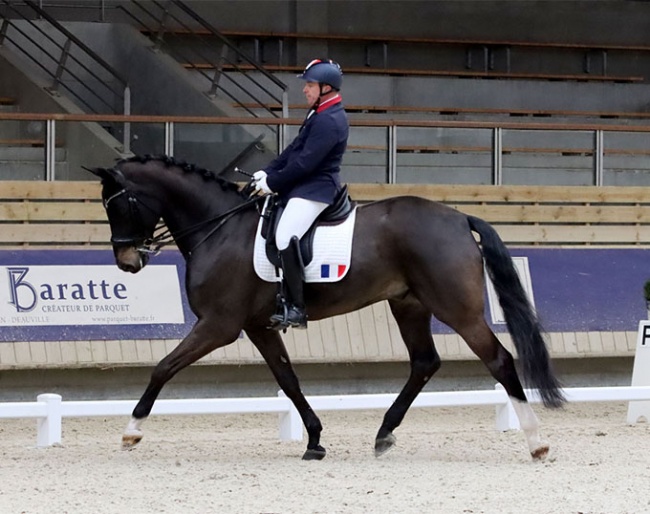 The 39 para-equestrian dressage riders participating in Deauville’s CPEDI***, an event organised by Handi Equi' Compet, began their competition this Friday at the Pôle International du Cheval Longines -Deauville. The opportunity to watch some of the World's best in the discipline who have come to Normandy, launching a season which will be marked by the World Championships this summer in Denmark.

The relief was unanimous. Due to the snowstorm and strong winds forecast for Friday in Normandy, the organisers had decided on Thursday to transfer classes from the outside arena to the indoor one at the Pôle International du Cheval Longines - Deauville. The 39 cobinations on the start-line, divided over the five grades according to their handicap, were therefore able to ride their tests in safe and acceptable conditions. This Saturday, classes will again be taking place indoors.

In nearly all the grades, the hierarchy was respected with the World's best taking the top places right from the very start. In the Nations Cup (*), victory should be played out between Great-Britain (currently on 215.028 points) and the Netherlands (213.286). The two nations are separated by less than two points at the end of the first day, and have a relatively comfortable lead (4 points) over France (209.211) who were penalised by the elimination of Anne-Frédérique Royon and therefore reduced to three riders in their team, just like Belgium, currently fourth (197.590).

The World ranking hierarchy was respected in the Grade I class. Number 1 in his Grade, the 34 year-old Latvian Rihard Snikus won with his 14 year-old gelding King of the Dance, who has already offered him two silver medals at the Tokyo Paralympic Games. Achieving a score of 76.571% and the unanimity of the five international judges (United States, Germany, Norway, Great Britain and France), he finished well ahead of Great- Britain’s Gabriella Blake riding Strong Beau (68.607%), and the Franco-American Marie Vonderheyden on Bombastic d'Arion (64.036), competing as an individual.

Grade II : “One rider from Great Britain can hide another”

"It's a lovely surprise!” Great Britain’s Georgia Wilson had a huge smile on her face following her victory in the Grade II test. Riding Sakura, an 8 year old mare, she rode a beautiful test that was awarded a score of 71%. “This is her first outing abroad,” she said. “She was great. Now I'm going to try to keep this momentum going all weekend.”

The British rider finished in-front of of the American Beatrice de Lavalette on Sixth Sense (70.758%) and France’s Céline Gerny who was hot on their heels with Rhapsodie Ene-HN (70.303%). She even had the satisfaction of being ahead of the British para-equestrian dressage star Lee Pearson, the most medalled athlete in history with notably 14 gold medals won at Paralympic games, who finished fourth.

Grade III: Success for the Netherlands

Choosing to bring a young 7 year-old KWPN mare, Katharina Sollenburg, Belgium’s Manon Claeys, the World number 3 and bronze medallist at the Tokyo Paralympic Games (with San Dior 2), won the Grade IV test (71.500%) in front of the Dutch rider Melissa Janssen (70.800%) and France’s Vladimir Vinchon on Fidertanz for Rosi (70.575%), who was penalised by a mistake near the beginning of his test.

“I’m really pleased with my mare who’s only competing in her second international competition,” said the Belgian. “I’m really proud of her, especially in this very spooky arena. She remains my second ride because I still have San Dior but it's very beneficial to give her experience for future”.

No surprise in the Grade V

The great British champion Sophie Wells, team gold medallist at last summer's Paralympic Games in Tokyo (also individual silver medallist) and the 2016 Paralympic individual champion in Rio, dominated the day's class with her Olympic horse Don Cara M (73.907%). With a score of 71.721%, Britney de Jong from the Netherlands took second place ahead of Belgium’s Ulrike Dekeyzer on Sir William (68.326%). Noteworthy were the fourth and fifth places of the France’s Peggy Touzard on Bretzel des Fééries (66.884%) and Johanna Zilberstein with Sir Swarovski II V (66.558%) who were both making their international debuts.