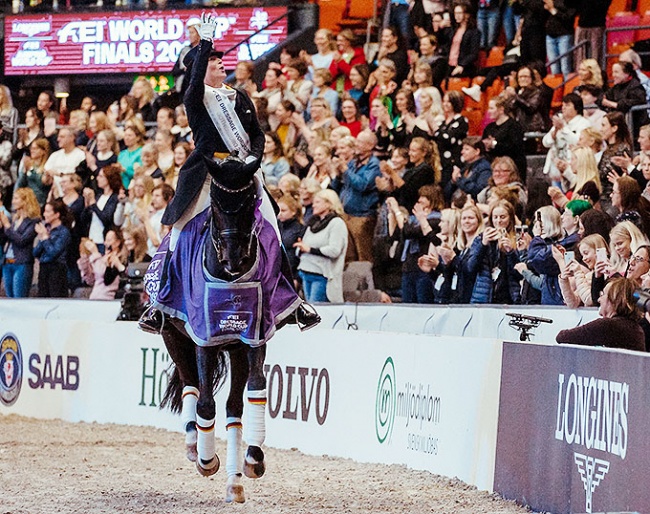 In the history of equestrian sport there are names that resonate, because the best of the best in each discipline make their mark. Isabell Werth’s name is one of those, having carved out a long and hugely successful career during which she has collected a mountain of medals along with the elegant FEI Dressage World Cup™ trophy on no less than five occasions.

Already the most decorated equestrian athlete of all time, the German superstar returns this week to the 2022 Dressage World Cup™ Final to defend the title she first claimed with Fabienne in Gothenburg (SWE) back in 1992. And it will be a poignant event for the 52-year-old rider because her great mare, Weihegold OLD, will be retired after next Saturday’s Freestyle.

The pair are defending three-time champions having proven unbeatable in Omaha (USA) in 2017, in Paris (FRA) in 2018 and at the last Final staged in Gothenburg (SWE) in 2019 before the pandemic took its toll. We will never know if their strike-rate would have continued had the 2020 and 2021 Finals been staged, but they will still make more history if they could pull off one more win this week on home ground in Leipzig (GER).

The Netherlands’ Anky van Grunsven holds the record for the most victories in the series that this year celebrates its 35th season. The Dutch rider racked up a colossal nine wins with two great horses, Bonfire and Salinero, between 1995 and 2008 but she never managed four-in-a-row.

If Werth and Weihegold come out on top they will be the first to do just that, bringing their partnership to the perfect conclusion. But the 17-year-old mare owes nothing to anyone when she steps into the arena this week.

At the Rio 2016 Olympic Games she clinched team gold and individual silver before going on to take all gold at the FEI European Championships in 2017 and team gold and Grand Prix Special silver at the 2021 edition.

She has made the FEI Dressage World Cup™ Final all her own in recent years and at the Western European League qualifier in Lyon (FRA) last October posted her fifth consecutive win at the French fixture. She was able to qualify Weihegold for the finals with only one start this season due to a convenient last minute FEI rule change in February because of corona. Normally a minimum of two starts are required for a title defender to compete a certain horse in the Finals.

The biggest threat to her supremacy probably comes from another super mare, the 14-year-old TSF Dalera BB who has swept all before her in the recent past with Werth’s compatriot, Jessica von Bredow-Werndl in the saddle.

This pair, who top the World Dressage Rankings, go into battle this week with a full set of Olympic and European medals in their hip pocket, all collected in the last seven months, and firing on all cylinders following victories at the last two legs of the Western European League 2021/2022 in Neumünster (GER) in February and ’s-Hertogenbosch (NED) just three weeks ago. They will be by far the biggest threat to the entire field of 18 horse-and-rider combinations from 13 countries when the action begins with the Short Grand Prix on Thursday evening, April 7.

The host nation looks really strong, with 2013 series champion Helen Langehanenberg also flying the home flag with Annabelle 110, but Denmark’s Cathrine Dufour is likely to pose a threat with the 10-year-old Vamos Amigos who showed huge promise when finishing second to von Bredow-Werndl and Dalera in Neumünster. The strength of the Danish contingent was quite apparent that day when Nanna Skodberg Merrald lined up in third with Atterupgaards Orthilia and Carina Cassøe Krüth finished fourth with Heiline’s Danciera, and all three Danes have made the cut to this weeks’ Final.

Moldova’s Alisa Glinka (Aachen), Poland’s Katarzyna Milczarek (Guapo), Morocco’s Yessin Rahmouni (All at Once), Portugal’s Rodrigo Torres (Fogoso Horsecampline) and Dominican Republic’s Yvonne Losos de Muñiz (Aquamarijn) round up the startlist, and the order-of-go will be decided by a draw for the Short Grand Prix on Wednesday afternoon.

It was an all-German podium when Werth first won the FEI Dressage World Cup™ title 30 years ago, while The Netherlands Imke Schellekens-Bartels finished second ahead of America’s Steffen Peters when she did it again in Las Vegas (USA) in 2007. America’s Laura Graves was her closest rival at the last three editions but it is compatriot von Bredow-Werndl who is likely to apply the maximum pressure this time around.

However anyone who has watched Werth throughout her career knows her will to win, and her dedication to her horses, is second to none. There will be a lot of emotion in the air when Weihegold does her last dance in next Sunday’s Freestyle.

So don’t miss a hoofbeat…..