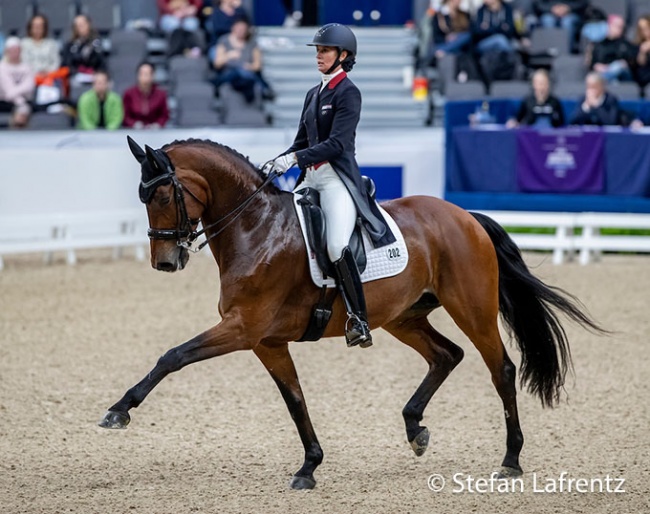 Yvonne Losos de Muniz, Yessin Rahmouni, Carina Cassoe Kruth, and Rodrigo Torres are the recipients of the four final slots that make up the entry list for the 2022 World Cup Finals in Leipzig.

The FEI Dressage World Cup™ 2021/2022 qualifying season came to an exciting conclusion at Motesice in Slovakia last Sunday where Freestyle victory secured a place at next month’s Final for former champion, Helen Langehanenberg, while Moldova’s Alisa Glinka was confirmed winner of the Central European League.

Just two slots are available to athletes from the Central European League which kicked off in Minsk (BLR) in April 2021 with victory for the eventual league winner, Glinka. The 35-year-old athlete then went on to win three more rounds of the 19-leg series, at Zhashkiv (UKR) and Kunkiai (LTU) in May 2021 and in Kharkiv (UKR) in June partnering Aachen, and the impressive pair also posted two runner-up finishes during the season.

Katarzyna Milczarek finished eight points behind on the final leaderboard but showed just how competitive she is when putting former champion, Langehanenberg, under plenty of pressure over the weekend at Motesice. The veteran Polish athlete posted a win with Guapo at this season’s fifth qualifier in Samorin (SVK), and last weekend’s second-place result with the 11-year-old stallion bought her ticket to the 2022 Final.

Points of only three qualifiers instead of four counted towards the final ranking. They reason for the change was the cancellation of five (Western European League!) qualifiers this season due to Covid-19. Six still took place between October 2021 and March 2022: Herning, Lyon, Madrid, London, Neumunster, and 's Hertogenbosch.

Riders can compete two different horses on the World Cup circuit, but it was mandatory for the horse to compete in at least TWO qualifiers. This rule was also changed to one mandatory CDI-W start. The change  was a particular benefit  to title defender Isabell Werth, who had only shown Weihegold once (Lyon), while she rode Quantaz in Neumunster and Den Bosch. Also Patrik Kittel took advantage of this rule change as he can now pick between Blue Hors Zepter and Forever Young, which were both  shown just once at a qualifier.

Western European League riders could also earn points at qualifiers outside of their league (not a new rule) and especially Juan Matute Guimon and Helen Langehanenberg worked this system to obtain their slot in Leipzig.

With no Pacific League final having taken place due to Covid, this slot became an "extra starting place" and the three spots have been allocated to  Carina Cassoe Kruth (DEN), Yessin Rahmouni (MOR), and Rodrigo Torres (POR).

The FEI rule says: If more starting places are available, these will be allocated to the athlete/horse combination(s) with the highest ranking (as a combination) on the February of the current year FEI Dressage World Ranking List, and who have participated in at least one CDI-W.

The highest ranked rider in Western Europe, not yet qualifier was Beatriz Ferrer-Salat (ESP) but she declined the spot, passing it down to the next ranked rider Carina Cassoe Kruth (DEN).  Dutch based Moroccan Yessin Rahmouni is from a non-league and rode at the CDI-W's in Lyon and Den Bosch.

Western European League rider Rodrigo Torres (POR) is ranked 52nd in the WEL ranking and 30th on the World Ranking. He is the last lucky one to have received a starting place from the FEI. He also benefit from the one-start-per horse rule; he competed in one CDI-W, in Madrid, and scored 75.840% in the freestyle.