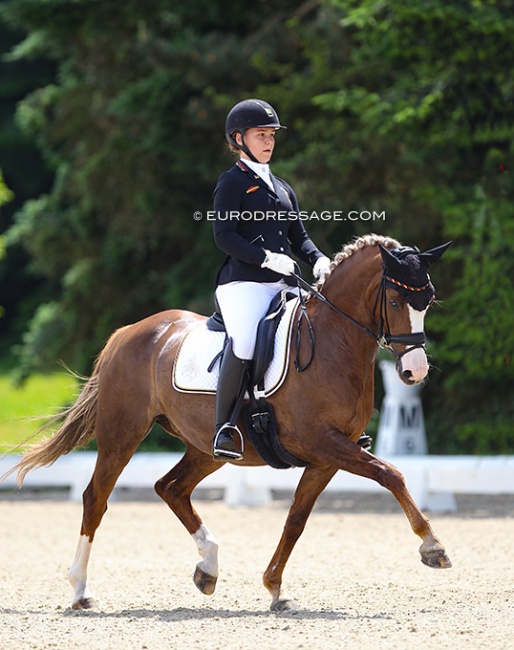 Top Queen H is a 14-year old German riding pony by Top Anthony II out of De Luxe II (by Dark Rubin x Damokles). She is bred by Sascha Hahn.

The liver chestnut mare was first started as a 4-year old under Laurien Hawerkamp, who competed her through 2014.

In 2015 Lilian Zimmermann climbed on board and showed her at regional L level for one year.

In 2015 the mare sold to the Treffinger family for Moritz to ride.

Moritz and Top Queen H made their international show debut at the 2016 CDI Prangins. At their next international, the 2017 CDI Wiener Neustadt, they won two out of three tests.

In 2018, Treffinger became the one to beat in Europe winning trophies at the CDI's in Le Mans and Wiener Neustadt and he was second three times at the CDIO-P Hagen. At the 2018 European Pony Championships in Bishop Burton (GBR) he was undefeated and scored triple gold.

He finished his pony time by winning the 2018 German Pony Championship.

They made their international debut at the CDI Ornago in March 2019 and competed at CDI's in Saumur, Nice and Aachen, winning four international classes.

With three FEI ponies to ride, all former german team ponies (Dujardin B, Der Kleine Sunnyboy, Paulina had a busy pony period from 2019 till 2021. She rode Top Queen H at just two more CDI's, in Mariakalnok in 2020 and at the CDI-P Hagen, a German team selection trial, in June 2021.

The pair did not make the highly competitive German pony team in those three years, but gained valuable experience along the way in preparation for horses. 2022 will be Paulina's last year on ponies as she turns 16 this year.

The Von Wulffen family has kindly loaned the ride on the liver chestnut mare to 12-year old Freya Gerbaulet, who is based in Dusseldorf.

Equitaris posted that Freya began riding at the age of 6 at the stable Rüenberg and moved to Gut Römerhof in August 2020, where Tara Schneider is training her.

The new duo made its show debut at the local show in Wesel, where they posted an 8.0 in the dressage rider L-test.