Juliane Brunkhorst Rules the Roost at the 2022 CDI Redefin 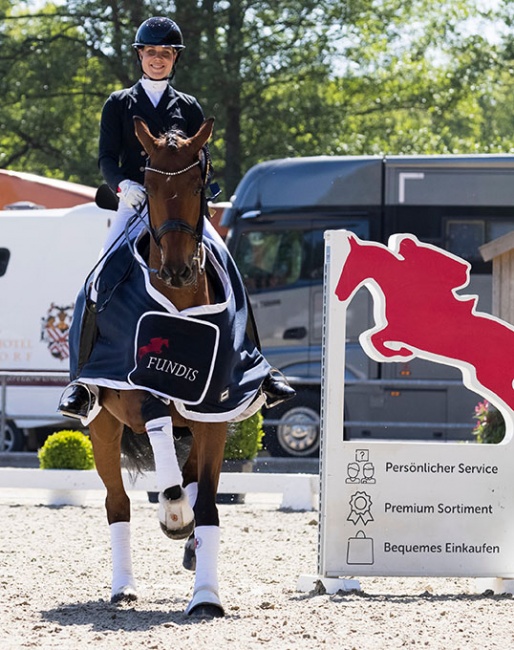 Juliane Brunkhorst ruled the roost at the inaugural CDI Redefin on 13 - 15 May 2022. Not only did she dominate the international big tour on the Holsteiner Aperol, but she also won the national Nurnberger Burgpokal qualifier with Elitist.

The eight-year-old Elitist (by Escolar x De Niro) won the qualification for the Nurnberger Burgpokal in Redefin with his trainer Juliane Brunkhorst from Harsefeld. Just like in the preliminary competition, the pair came out on top in the Prix St Georges Special with the Rhineland gelding, owned by the Schmitz-Heinen family. The pair scored 75.976% for the victory.

Redefin is one of only 12 stops nationwide for the most important German series for young horses aged 7 – 9.

The 38-year-old Juliane Brunkhorst is going to have fond memories of  her weekend in Redefin, she also won the Grand Prix Freestyle of the CDI3* Tour with Heidi Blohm's 11-year old Aperol (by Ampere x Aljano) and the Grand Prix before that.

The riders from 14 nations felt comfortable at the new location. “It is very practical and good for us to have the competition area and the warm-up area so close together,” Brunkhorst emphasised, “and for the younger horses, who have hardly seen any spectators in the past two years, it was a completely different experience.”

The diverse programme, which ranged from the Bundeschampionat qualifications to the Grand Prix Freestyle and Grand Prix Special, good weather and the inviting large grandstand attracted many curious dressage fans to the Parade Stadium on the weekend. The view includes both the warm-up area and the competition and access to the dressage stadium was also completely free.

“There is always something that could be changed or improved,” said Francois Kasselmann, “but as always we will look at that afterwards. I think there is no reason why we shouldn’t experience international competition at the Pferdefestival Redefin again in 2023.”