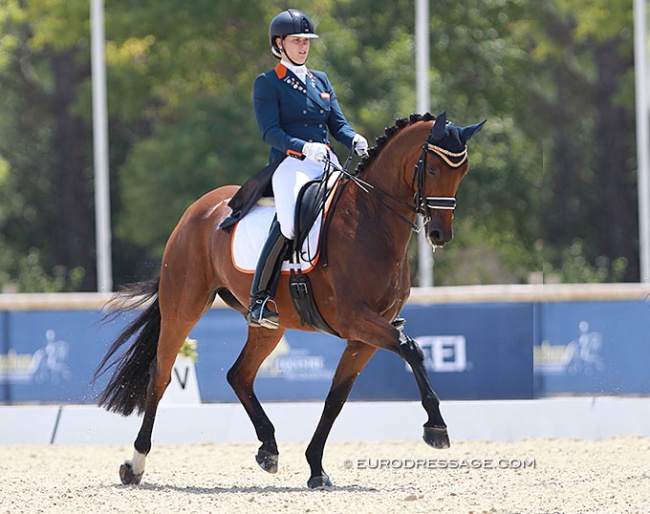 Walküre was by Romanov out of Weissera (by Donnerschwee x Waldschutz x Futuro). She was bred by Clemens von Merveldt in Vechta, Germany.

Finnish Grand Prix rider Stella Hagelstam discovered Walküre as a 5-year old and developed the mare up to FEI level but did not compete her.

She made her international show debut at the 2014 CDI Pompadour under French Alizee Froment.

Dutch young rider Dana van Lierop received the ride in the summer of 2014 and first competed her internationally at the 2015 in Drachten, followed by Wellington, Nieuw en St. Joosland, Roosendaal, and Compiègne.

The pair were selected on the Dutch team and won team silver, individual test gold and kur silver at the 2015 European Young Riders Championships in Vidauban, France. They posted a world record score at the time.

In October 2015 Walküre sold to Agnete Kirk Thinggaard, but she never competed her

In 2017 Walküre was leased to Malaysian Qabil Ambak, who trains in Denmark with Dennis Fisker, Thinggaard's former assistant trainer. Ambak won silver at the 2017 South East Asian Games in Kuan Rawang with her.

In 2018 the FEI also listed Ambak's family as owner of the horse. The Malaysian showed her once more at the CDIO Uggerhalne.

In November 2018 the mare sold to Luxembourg's Emma-Lou Becca as her youth rider's horse.

Trained at the time by Fie Skarsoe, Becca and "Leopard's Walkure" premiered at junior level the 2018 CDI Aachen Indoor. Two months later they competed in the junior classes at the CDI Lier.

In May 2019 they moved up to Young Riders' level and won the individual test at the CDI-Y Lipica. It was their last competition together.

Walkure was retired from competition sport in 2020 at the age of 15.  She began a career as broodmare and a month ago produced three foals by embryotransfer: two colts by Glamourdale and Negro, and a filly by Kjento.

On Tuesday morning 17 May 2022, Walkure unfortunately died suddenly and quickly from a suspected heart attack.

"It’s very sad and I’m just shocked," Becca told Eurodressage. "I have no words for this tragedy and we will all miss her a lot. She was a superstar!"

Becca, who moved from Luxembourg to Munich in September 2021 to study Business Management, has scaled down on her riding to combine is with University. She now trains with Dieter Laugks and has two horses to ride, the 11-year old Gucci-Sinclair (by Silvano x Sir Sinclair) and the 4-year old Drake (by Danone x Sir Donnerhall).

"I’m going into my second year of Uni and I’m finally all settled in in Munich and we will see what the future will bring," Emma-Lou added. "It was also a big change for me to change trainers after working with Fie for 9 years."