Dujardin Sweeps the Board at 2022 CDI Wellington Heckfield 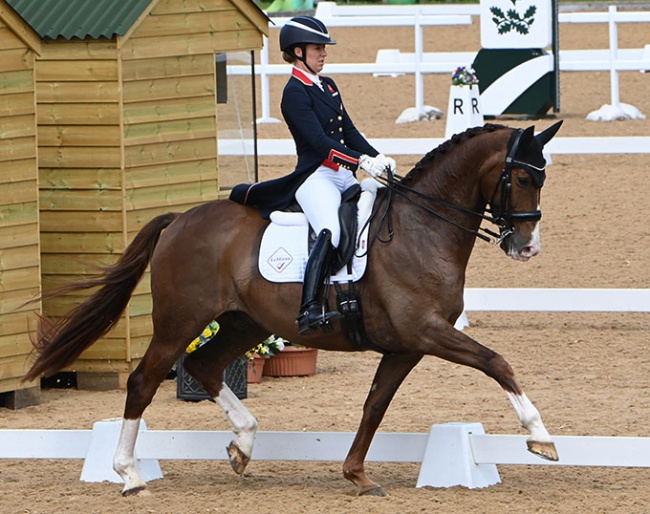 Charlotte Dujardin swept the board in the CDI3* and CDI1* at the first UK outdoor international of the season, hosted by Wellington Riding in Hampshire on 9 – 12 June 2022. Wins in the Grand Prix and Special with her newest star, Imhotep, took her a step closer to her World Championship target, plus she claimed a Small Tour double with Hilus MBH.

Imhotep (by Everdale x Vivaldi) continued to show his immense potential with Charlotte by winning the Grand Prix on 77.761% along with taking the victory in the Grand Prix Special on a score of 78.362% at only his second time performing the Special in competition. Owned by Carl Hester and Coral Ingham, Imhotep has all the hallmarks of a world class horse – the power, the energy, the adjustability, the charisma – all expertly orchestrated by Charlotte, and clear to see since he stepped up to Grand Prix earlier this year.

Following a Grand Prix win at Myerscough Premier League in March, Imhotep made his international debut in Compiègne just three weeks ago, Wellington being his second international appearance. The youngest horse in the field, his performances belied his low-mileage and he and Charlotte delivered two fabulous tests full of suppleness and balanced power. It’s exciting to think what the future might hold for this pair.

Another exciting combination in Great Britain’s selection pool of talent for the World Championships in August, Gareth Hughes and Briolinca – the mare continuing her impressive comeback after a year off with injury – delighted their legion of fans with two strong performances for second place behind Charlotte both days.

Gareth and the gorgeous Trento B x Royal Dance mare, now 16, were winners at Compiègne CDI3* a few short weeks ago, and here at Wellington achieved 75.913% in the Grand Prix and 76.511% in the Special. Briolinca, who Gareth co-owns with his wife Rebecca, daughter Ruby and Julia Hornig, earned a plethora of 8s and 8.5s for her passage and pirouettes – real highlights for this horse – and overall, two consistent and polished rides. Winners of hearts at the 2019 European Championships where they wowed with three top-ten placings, it’s great to see them back and going great guns between the white boards.

The pair, who were travelling reserves for Tokyo last year, went on to claim Friday night’s Grand Prix Freestyle, on the horse’s music debut, with 76.800%. Gareth ran through the programme for the first time on the Tuesday before and had to improvise a little to make it fit. That aside, it was a super quality, harmonious test under the evening sun at Wellington from Gareth and this athletic Sandro Hit son.

Four-time Olympian Richard Davison and Gwendolyn Sontheim’s Bubblingh (by Lingh x Picandt) posted 75.410% for second place riding to their well-known Gangsta’s Paradise programme. The sensitive gelding, now 16, showed a little tension at the start of the test, settling to produce high quality work for some big marks, particularly the canter pirouettes, which are a real highlight for this pair. Wellington was their first outdoor show for a year and a great one to have under their belt before heading to CHIO Rotterdam later this month.

In the Small Tour, Charlotte Dujardin and Hilus MBH   were unbeaten. The duo claimed the Prix St Georges and the Intermediate I on scores of 74.706% and 73.992% respectively. Hilus MBH, a 10-year-old Johnson-sired gelding is owned by Sarah Pidgley and has been competed by Charlotte since the beginning of this year, with winning results at Hickstead Premier League in May.

The bay gelding was first competed by Swedish Michael Alderin-Danielsson, before he sold to Pidgley and was put in training with Cathrine Dufour in Denmark, who took the horse to FEI level.

Deutrom and San Marco Win U25

Dylan Deutrom and San Marco (by Status Quo x Gribaldi) were on winning form, claiming both CDIU25 Inter II and U25 Grand Prix on their debut at the level on plus-68% scores. French rider Camille Audo took second spot both times with her United x Gribaldi gelding, Behroez.

Dylan, who is stable rider at Hicks Equestrian in Hampshire, competed at his first overseas international with Sarah Church and William Deans’ 12-year-old in April this year (Opglabbeek CDI) where they enjoyed a double win in the Small Tour.