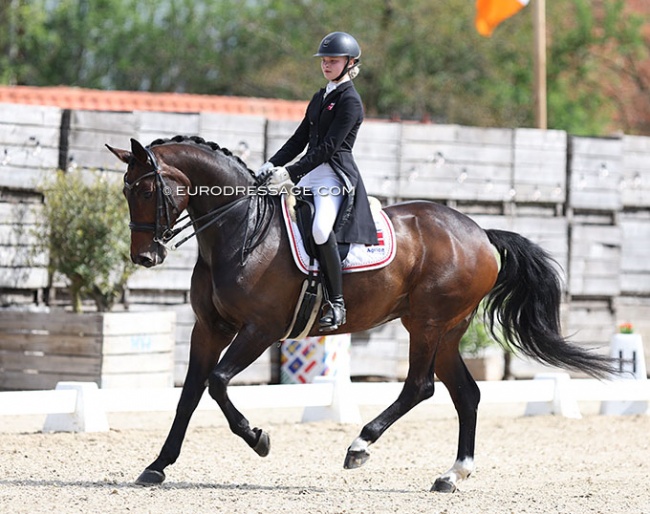 The Danish team that is travelling to Hartpury (GBR) for the 2022 European Junior Riders Championships is slightly different from the one announced on 22 June 2022.

Junior rider Johanne Kofod Jensen has been forced to withdraw as her horse Frida Gold is not fit to compete.

"Sadly Frida has taken a wrong step and needs rest. Therefore we had to withdraw," Johanne told Eurodressage. "We hope she will be ok again soon. Right now her welfare is my top priority. This horse is very special to me."

Frida Gold is a 14-year old Oldenburg mare by Fidertanz out of Daylight Dance (by De Niro). She is bred by Hans-Jurgen Heitmann.

Owned by Hof Kasselmann, she was first competed as a 5-year old in 2013 by Eva Möller and became first reserve for the German team for the 2013 World Young Horse Championships. The mare sold at the 2013 PSI Auction for 115,000 euro. A year later she returned to the show ring with the Luxembourg based Finnish rider Terhi Stegars, who showed her through 2016 for owner Kirsti Rinta Ortotaito Ky.

The mare then moved to Denmark and was first shown on Danish soil by Maja Borup Marcussen in 2017. A show break of three years followed and in 2020 she returned to the national arena under Thilde Alsing.

Kofod Jensen began competing her in the spring of 2020, riding her first national show in June in Ringe (DEN). Their international show debut followed a year later in June 2021 in Ypaja. This year they showed at CDI's in Sint-Truiden, Aalborg and Hagen.

The pair has been replaced by the first reserve: Thilde Rude Hare on Fred the Red.

The 2022 European Junior and Young Riders Championships start on 25 July with the opening ceremony and the team tests kick off on Tuesday 26 July.