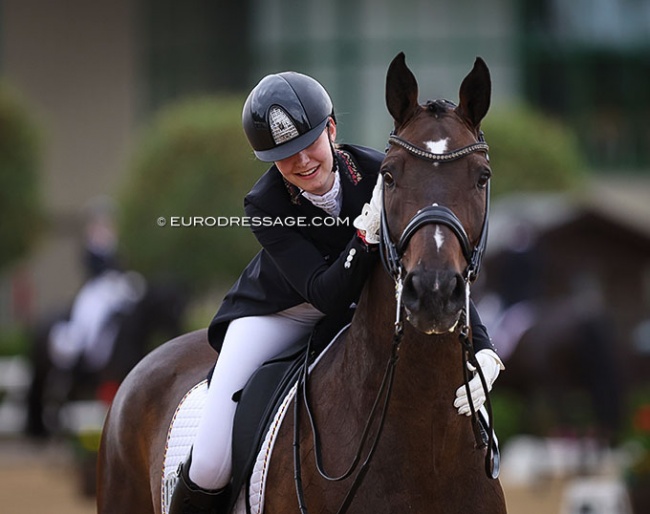 The sisters Allegra and Helena Schmitz-Morkramer have taken the lead in the individual test, which the first group of riders rode on the third day of competition at 2022 European Junior and Young Riders Championships in Hartpury (GBR) on Thursday 28 July 2022.

After a successful first two days of competition which decided the team medals, dressage action at  Hartpury equine college continued on Thursday with the Individual test in which a new set of medals is to be won and of which the top 18 ranked riders are allowed into the freestyle. Only three riders per nation are eligible to move on to the next round so often this leads to several riders missing the boat for the freestyle finale.

The young riders individual test in Hartpury began in an unusual format, with just four judges even though the FEI dictates that five judges need to officiate in a Championship test.

The American judge, Mrs Weatherwax, had suddenly fell ill and no "travelling reserve judge" was on call as the FEI rules stipulates that for lower level Championships a reserve judge should be on site "whenever possible." Hartpury, however, has several highly qualified judges on the scene  in some sort of capacity (Maria Colliander FIN or Freddy Leyman BEL, Andrew Gardner GBR as JSP member, and Raphael Saleh FRA/Carlos Lopes POR but they are coaching), so the president of the ground jury (Stephen Clark)e decided to judge the class with four panelists, which of course is not to the advantage of the riders.

Young Riders: Helena On the Ball

After having top the Young Rider team championship test on Wednesday, Helena Schmitz-Morkramer and the 12-year old Lifestyle (by Lord Fantastic x Samba Hit) are the hot favourites for another gold and they immediately showed they meant business in the individual test. Though there was a bit of movement in the halt at entry, the trot work was ridden more forward and energetically than in the team test, which led to more expression, but also, at brief moments, Lifestyle showing his tongue through his lips. The contact was more elastic in walk and canter. The rein back halt wasn't square but the steps were nicely diagonal. The extended walk had good marching and overtrack, the rhythm could have shown more V-moment. The canter half pirouettes were very well ridden, the changes were all correct. Helena produced a very secure test that seemed effortlessly. The judges rewarded it with a personal best of 76.949%

Team mate Lucie-Anouk Baumgurtel and her 10-year old KWPN gelding Hugo (by Spielberg x Krack C) are second provisionally with 75.368%. The experienced medal winning rider rode with the knife between her teeth and on a mission. She was in charge of the trot part and clearly showed a good differentiation between collected, medium and extended trot. At times the nose crept behind the vertical, although the contact was not heavy. In the right volte the horse could have been flexed a bit more but it was impressive to see how she rode from marker to marker. In the left canter half pirouette there was a loss of impulsion, but the entire canter tour was ridden with determination.

British Caitlin Burgess and her 15-year old KWPN gelding Chocotof (by Lord Leatherdale x Negro) have a textbook example of what dressage is all about ! The bay horse is a bit more old fashioned looking and by far does not have the quality gaits and suspension of some of those six-figure costing horses that can be seen at these Europeans, but boy did this girl ride an amazing test! The horse was always up in the poll, elastic and even in the contact, lightly foaming, balanced and well carried. They did not miss a beat int he rhythm. The halt for rein back was not square, the pirouettes were correct but maybe not as awe-inspiring, and the flying change after the extended canter came early to the marker. However Burgess' test was what real dressage was all about! She squared 72.831% and maybe the judge at B (Alice Schwab) saw it best with her 74.265%.

Belgian Amber van den Steen and her 12-year old Fame (by Ampere x Sultano) also upped the ante today and corrected the little mistakes she made in the team test. While the walk is the weak point of this horse, the incredibly balanced and regular trot and super solid canter work with uphill changes are this horse's forte. They finished fourth provisionally with 71.838%, a score that is only a little bit more than her team score (71.324%) despite the big improvement. The judge at C, Maarten van der Heijden, was wearing his glasses and scored it 74.559%

Juniors: Allegra Back in the Lead

Aboard her 10-year old Hanoverian stallion Libertad (by Londontime x San Remo) Allegra produced a very strong test. The trot extensions had good overtrack but in the first one, the horse could have been a bit quicker from behind, the second diagonal had more pezzazz. The left shoulder-in was lovely, the half passes were balanced but in the right one there could be a bit more ground cover. The collected was was clear and active, the extended had two hooves overtrack. In canter the horse showed very regular striding, a wonderful extended canter and great final flying change at the end of the diagonal. Overall Libertad is consistent in the head-neck position, but could be a bit more up in the poll and the mouth is rather dry. They posted a whopping 77.030% for the overnight lead. The marks range from 74.265% (Roudier) to 78.824% (Wessels).

Denmark's Sophia Obel Jorgensen and her pocket rocket Brilliant (by Bretton Woods x Diamond Hit) are currently in runner-up position with 74.618%. All judges marked her in the 74% range. The first medium trot was rushed, but in general the 10-year old stayed nicely up in the frame and did not lose any expression in the voltes and half passes. He lost the impulsion int he left turn on the haunches and the extended walk showed no overtrack whatsoever (score 6.5 - 7.5 !). The canter work was solid and accurately ridden but there was a small hesitation in the flying change on the centerline.

France's Mathilde Juglaret and the 10-year old Caporal de Massa (by Rieto x Xaqiero) also produced a very strong ride, but with a bit more polish they could have been medal contenders. The horse could have stretched a bit more into the contact when given the reins in trot, but the overall the trot work was impressive, with much ground cover in the extensions and half passes. The simple change was short though and in the collected walk the horse could be relaxed a bit more. Still, it was a very strong ride and Juglaret should not be ruled for the medals in the freestyle!. For their individual test they got 74.324% and are third provisionally. Anything can still happen.